The Unfaithful Queen: A Novel of Henry VIII's Fifth Wife by Carolly Erickson 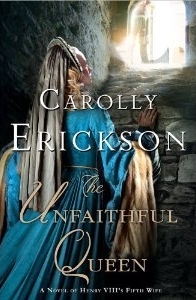 Remember when Philippa Gregory was at the peak of her popularity and everyone was falling over themselves to see who could write the Tudoriest Tudor book that ever Tudored its way onto the best-seller's list? I DO! And this book-- I'm pretty sure-- is one of those. NOT THAT THAT'S A BAD THING OH NO. I love me some trashtastic reads and nothing is quite as fun as diving into a fictionalized down and dirty account of real trash people living their trash lives in trash history. #TRASH

I bought this and one of this author's other books, THE FAVORED QUEEN, a while ago, but then I glutted myself on historical fiction and got bored with the genre, so this book has just been chilling in my room, gathering dust... UNTIL NOW. To be honest, I don't actually know that much about Catherine Howard, Henry VIII's fifth wife. I've read a ton of books about Anne Boleyn and Catherine of Aragon, but not so much about the others. I think it's always interesting to read books like this because the author usually goes into it with some bias (like how Philippa Gregory seems to think that Anne Boleyn is the sluttiest slut who ever slutted). Interestingly, Anne of Cleves (here called Anna) is portrayed as a jealous and childish harridan who wastes no time in Mean Girling poor Catherine into an execution *eye roll*.

I actually did enjoy this book, though! Actually I enjoyed it for the reasons that a lot of people seemed to hate it. It's so OTT, like a bodice-ripper. Like, it opens up with Catherine living as a ward or something in her Grandma Dearest's House (NO MORE WIRE HANGERS) where one of the girls-- a total ho-- teaches them how you can use lemons as spermicide by shoving it up your coochie. The book literally opens-- AND ENDS-- with a beheading. Catherine is Anne Boleyn's cousin and she's just watching her cousin get murdered like it's NBD. Then she ends up almost engaged to two dudes, both of whom are using her, before capturing the eye of the king. He gifts her a monkey and annuls his marriage to gross ugly Anna for her sake, and then she can't even get pregnant. Whaaaaaat.

Hilariously, the part about Henry getting angry at Anne for not recognizing him in disguise totally did happen, according to history. Like he dressed up as a peasant or something and got all up in her face and she was like EW WHO IS THIS PEASANT. As one does. Hilariously, he also did give her her own lands and estates, friendzoning her as graciously as was possible back in the day by referring to her as his dearest "sister." LOL. I honestly think she got off the best out of all his wives, tbh. She got all the riches and she didn't have to play to his ego or, you know, get her head chopped off.

I would classify THE UNFAITHFUL QUEEN as a trashy historical. It's almost literary but not quite and I think it will appeal to people who like romance novels even though this doesn't have a happy ending. The fun, gossipy tone and the WTF factor made it a delight to read. I'm glad I have more from this author and will definitely be keeping an eye out for more of her books!