The Sky Atlas: The Greatest Maps, Myths and Discoveries of the Universe by Edward Brooke-Hitching 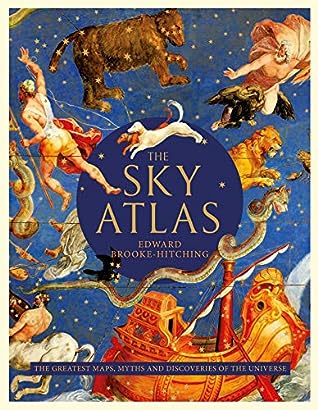 I bought this book on impulse because it was on sale and the picture on the cover was so pretty. Would this be a book of celestial maps? Well... sort of. SKY ATLAS actually ended up being more-- and less-- than what I thought it would be. In the beginning, there are a number of pictures of maps created by indigenous people and early civilizations (and even later ones!) as part of their mythological/spiritual beliefs about the sky, but then SKY ATLAS catapults into the scientific discoveries of the great minds from antiquity to the present day.

I actually haven't taken all that many hard sciences so some of this book was over my head, but I thought the author did a great job taking difficult subjects and simplifying them for the layman (layperson?). For example, comparing the theory of relativity to lying on a trampoline and then shooting a marble at the person (#rude) and the marble getting caught in the dip created by your mass. I understood that! There were also some really fascinating, tell-all-your-friends facts in here, too, like how an Egyptian vizier was executed for allegedly communicating with Saturn or how Venus apparently rotates at the speed that most people walk. Facts like these I could totally get down with and made the book totally worth it IMO, because knowledge is power! (Or... something.)

One of the best things about this book, though, is how inclusive it is. By including spiritual and mythological discoveries, Brooke-Hitching doesn't exclude indigenous people and THEIR observations of the sky. He also talks about the Middle East and Asia, and there are a TON of women scientists featured in here. Some of the things he talked about I had never learned and it was kind of cool to see how many women star-gazers there were and what their contributions to astronomy were.

Overall, SKY ATLAS ended up being a really fun and interesting read, kind of like Bill Nye for adults, and I think that the author has a really fun and accessible narrative "voice" that makes the book even more engaging, despite the difficulty of some of the subject matter.