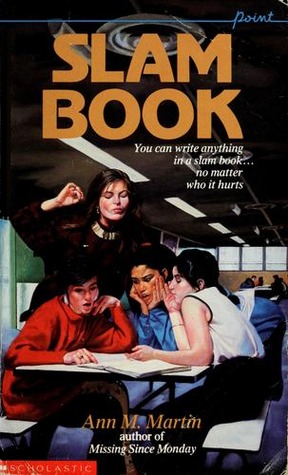 Most people know Ann M. Martin from her popular series, The Baby-Sitters' Club, or her preteen one-offs, like BUMMER SUMMER or ME AND KATIE (THE PEST). I had never actually heard of SLAM BOOK before, until I saw it mentioned in Gabrielle Moss's fantastic book, PAPERBACK CRUSH, where she lists some influential paperback books aimed at preteens and teens from the 70s-90s, when publishing began to discover that not only was there a niche for kids in the double-digits but also that it was $$profitable$$.

SLAM BOOK appears to be geared towards an older audience than some of Martin's other books. The "heroine," Anna, is just starting out as a freshman in high school. Right before she begins at her new school, she has a visit with her cousin, who introduces her to the concept of a "slam book." For those of you who are old (like me) and don't know what a slam book is, it's like the burn book from Mean Girls or like those apps people can download where people can anonymously ask you questions (I think one of them is called ASKfm), only it's all done in physical form, like a yearbook, where anyone who has the book can see it.

Anna's burn book is an instant hit and she and her three friends, Jessie, Randy, and Paige, get really into it. The book is passed around to the entire school where everyone gets things written out them. WHAT FUN you are thinking, because you are a fool. If you're not a fool, you're probably thinking THIS IS NOT GOING TO END WELL, and you would be correct, my non-fool friend. It does not end well. Not that any adults get involved. Adults weren't invented until the 2000s. Anyway, things come to a head when Paige, the rich mean one, decides that she wants a boy, so she spreads a rumor that results in him breaking up with his girlfriend. When she tries to hit on him, though, he's like EW NO, and asks Anna out instead. WHAT. DON'T YOU KNOW HOW RICH AND AWESOME PAIGE IS? SHE WILL HAVE HER REVENGE. Suddenly, Anna is being called boy-crazy and a boyfriend-stealer! That's so hurtful! It's only ok to insult OTHER people but it HURTS when you do it to Anna! DON'T YOU KNOW HOW COOL AND AWESOME ANNA IS? SHE WILL HAVE HER REVENGE.

Anna decides that the best way to humiliate Paige is by siccing the unpopular heavy girl on her. Cheryl. She tells Cheryl (through the slam book, in Paige's handwriting) that a boy named Kirk likes her. This goes on for a while until eventually Anna sets up a fake double date between Paige, Kirk, and Cheryl. Cheryl goes to Paige's house on a bicycle, dressed up in her dead mother's prom dress, and Paige answers the door and basically unleashes the power of the slam book on Cheryl in person (basically, you know, insulting her looks, her body odor, her fashion sense, her poor person poverty). Cheryl ends her life. Paige feels guilty about this and ends up trying to take hers also.

But OH NO Anna feels guilty when someone who isn't unpopular and heavy almost dies. The truth must out! SO she tells Paige, who has just had her stomach pumped or something IDK, that SHE was the one who wrote all that stuff in the slam book. Paige gets mad and Anna is like HEY I'M JUST TELLING YOU WHAT I DID OK YOU DON'T HAVE TO BLAME ME. Also, Anna confessed to her mom first and her mom said-- THIS IS LITERALLY PARAPHRASED FROM THE BOOK-- no Anna it's not your fault, these girls just aren't "well-adjusted" (actual word used) and you aren't to blame if you didn't hold the razor or the pill bottle. WHAT. WHAT. WHAAAAAAAAAT. *head explodes*

So anyway, Anna is like neither of us are at fault, hooray no consequences, and everyone who isn't Cheryl lives happily ever after.

This book was published in the 90s when bullying really wasn't treated the same way it was now. I grew up in the 90s/early 2000s and I can tell you that administrations liked to keep a hands-off approach when it came to bullying and harassment. When I was the same age as Anna, actually, I was being bullied. I had a group of people following me around, calling me several slurs, threatening me with physical violence, shoving me in the halls, and encouraging me to end my life. They harassed me online and offline and when my mom complained to the administration and told them I'd been keeping logs, they were like IF IT DOESN'T HAPPEN ON CAMPUS WE CAN'T DO ANYTHING ABOUT IT SO GOOD LUCK WITH THAT BYE. Because-- remember-- adults weren't invented until the 2000s.

It wasn't until a number of high profile cases of MySpace harassment and bullying that culminated in suicide went viral that adults started to think, WOW, I GUESS ONLINE BULLYING ACTUALLY FOMENTS IRL BULLYING AND VICE-VERSA? WE PROBABLY SHOULDN'T TOLERATE THIS. Because it's finally the 2000s and adults remembered that not only were they invented now but that teens probably shouldn't be left to their own unsupervised devices on the wild west of the internet. You see all these people on Twitter boo-hooing about how X slur or Y harassment kept them from getting into their college of choice because boo hoo hoo it was the internet and everyone's mean. Anyone who's well-adjusted with a sense of humor understands an LOL or an internet funny JEEZ. But the fact of the matter is, words have consequences and sometimes they leave wounds that can outlast any bruise. Part of growing up is learning how to be accountable for one's treatment of others.

WHICH IS WHY THE ENDING OF THIS BOOK WAS SO INFURIATING TO ME. Because it's basically like "welp, she was weak and sad so sucks for her but also not our fault, BYE." No one really gets any real consequences for their actions and the only one who experiences REAL guilt over what she did is Paige, who is then immediately told not to worry about it. In some ways, it's a rather keen snapshot into how bullying and accountability was viewed in the 90s and 00s. But it's also a pretty toxic and infuriating mess, too, because it ages so badly that it almost seems to suggest that the kids who get bullied are asking for it in some way. The way that Randy's ethnicity (Black) was handled was also pretty clumsy. She's bullied for being an "Oreo" (a pejorative term for someone who is Black but acts "white") but nobody is ever punished for this and Randy just sort of ends up sucking it up. Also, there's an infuriating scene in the beginning of the book where Paige is shoplifting and like lalala FREE STUFF and Randy is like NOT COOL and the other girls are like OH MY GOD WHAT A SPOILSPORT WHY IS SHE STORMING OFF? Which would be a great teaching moment for how Black people are stalked in stores while people like Paige get off scot-free but NOPE. Paige isn't punished and Randy is just way lame, you guys, omg. At the end of the book, Randy is talking with her mom and she's like I'M GLAD MY CLIQUE DISBANDED and I'm thinking, Randy is literally the only sane person in this entire book and why is she not the heroine??? #RandyForPresident2024.

So obviously I hated this book. Until about 80% I liked it just fine but then it went all "NO REAL CONSEQUENCES LALALALALALA" and I wanted to launch it into a solar flare.

Ann M. Martin, you make me sad. I thought we were cool.