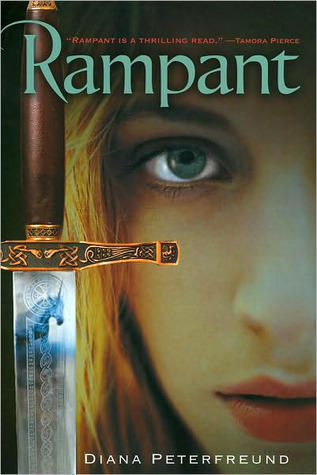 This is my second time reading RAMPANT and I think I actually enjoyed it just as much as I did the first time. RAMPANT is the story of a girl named Astrid Llewellyn who is descended from unicorn hunters. Her mother, Lilith, is obsessed with them and has been teaching Astrid her whole life that unicorns are evil. Astrid thinks her mom is pretty crazy until she's out in the woods with her boyfriend and the two of them are attacked by a rogue unicorn.

After that, Astrid is sent off to a special unicorn killing school in Italy that's masquerading as a religious order. Once there, she meets other girls who are descended from other lines of unicorn hunters. They even have a pet "house unicorn" named Bonegrinder. Astrid learns that there are different kinds of unicorns, ranging from the small, goat-like zhi to the Persian karkadann, which is the size of a tank. All unicorn hunters are apparently descendants of Alexander the Great, who rode to victory on a giant karkadann of his own: Bucephalus.

I loved this book so much. Sometimes the mythology didn't really make sense but most of it, I was like, okay, I can roll with this. I loved the Italian setting and the bond between the girls. This is surprisingly diverse for the time it came out: one of the girls is Black and the other is Singaporean Chinese. The way they rally together and train together and fight and protect one another was so well done. You just don't really see many YA fantasy books these days with that kind of theme of sisterhood, which made me enjoy this book even more than I did.

I think if you enjoyed VAMPIRE ACADEMY, you'll enjoy this book. It has the same themes: kick-butt girls, dangerous paranormal threats, secret magic schools abroad, forbidden love. I'm honestly surprised the reviews for RAMPANT are so mixed because it feels like the type of book so many readers are begging for. The only things that I think would put people off are a few throwaway remarks about sexuality that don't age well, rape (off-page, but the victim is gaslighted by an authority figure, although the main character stands up for her and a pretty interesting and heartfelt discussion follows), and the fact that the heroine is kind of spoiled and bratty (but in an age-appropriate way, tbh).

I LOVED this book and can't wait to read book two. Thank goodness I already own it!