The Last Time I Wore a Dress by Dylan Scholinski 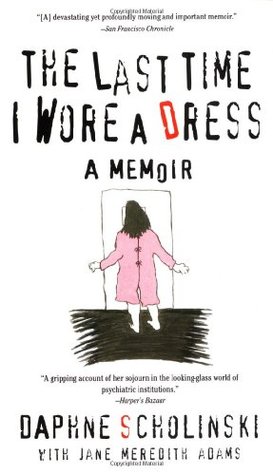 A note on this book: Daphne Scholinski is now Dylan Scholinski. I wrote in to a librarian on Goodreads to get this fixed, but that doesn't change the fact that the book-- and the blurb-- use the author's deadname and incorrect pronouns. So if you are blogging or reviewing this book, that is something to keep in mind! Don't misgender/deadname him. :)

THE LAST TIME I WORE A DRESS has a very similar format to GIRL, INTERRUPTED, in that it focuses intensely on what psychiatric treatments and institutionalizing were like in (what I believe) was the 70s or 80s. In this book, however, instead of talking about borderline personality disorder, Dylan writes about being institutionalized for gender identity disorder, a psychiatric "condition" that was later removed from the DSM because it is incredibly transphobic (basically punishing people for having gender dysphoria for being trans). Dylan is, in fact, a transman, and this book is all about him essentially being gaslit for being a bad "girl."

As you can imagine, this book is incredibly triggering. Especially since it also deals with other topics like substance abuse, parental abuse/neglect, and sexual abuse. Dylan was also involved in a gang at some point, too. He had a really interesting upbringing and is a compelling but blunt author. I saw a number of reviews that didn't care for his writing style but I actually really liked it: it really captures the zeitgeist of the times, y'know?

I read this when I was a teen before I knew that the author was trans, so having that perspective this second time around made the book even more interesting-- and painful-- to read. I did ultimately end up liking it but I had to put it down and come back to it again because it was a lot to read. The format of the book also didn't really work for me-- the notes from the doctors are in typewriter font that is hard to read and for some reason he decided to italicize the chapters about his home life. Definitely recommend this if you are interested in LGBT+ issues or the history of psychiatry, but it is not for everyone.