The Duke of Shadows by Meredith Duran 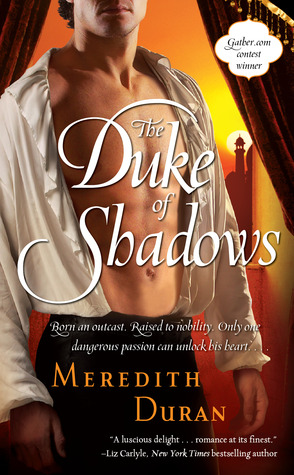 Meredith Duran is an author whose works I really like but wouldn't really say I love. That said, I've had so many people recommend this book, THE DUKE OF SHADOWS, to me, that I kind of felt like I had to read it. THE DUKE OF SHADOWS was Meredith Duran's debut work and an incredibly daring one: in some ways, it's a throwback to the globe-trotting bodice-rippers of the 80s, when everything was tinged by the threat of violence, and love and war often walked hand in hand.

This is a Victorian-era book, and the first quarter or so of the book is set in India just before the Rebellion of 1857. The heroine, Emma, has already been tarnished by tragedy. In a shipwreck that killed her entire family, she was the sole survivor. Now she is an artist who chafes at the bridles of English society. At a party, she encounters an unlikely guest: a marquess named Julian Sinclair, who has a reputation as a rake, as well as a traitor: he is one quarter Indian himself and sympathetic to his people.

The attraction between the two of them is instant and restrained. Emma is casually engaged to another man but he's a dick of the first order-- classist, racist, sexist, abusive. It's not really a contest if the other man wins from the start, right? And Julian is one of my favorite romance heroes that I've encountered lately. He's devoted and dangerous, which I think we can all agree is the best combination. The things he does for her left me on the floor, ready to give up the ghost for Julian Sinclair. I mean, a man can't say things like "You are the second person I have held down today. I will be more gentle with you, but I will not let you go. Do you understand?" and not expect every straight/pan woman and/or gay/pan man in the vicinity to drop dead of thirst.

Emma is also an amazing heroine. I felt like the author did a really good job showing how her biases colored her views of India, and how she gradually came to realize how problematic colonization was. Her PTSD in the aftermath of the war was also really heart-wrenching and I liked how she poured her feelings into her art since she was so ill-equipped to deal with them. (Stiff upper lip and all that.) Some people didn't like her as a character because she was immature and cold, but she was young when she met Julian and she had to endure things that would push anyone beyond the human limits of endurance. She ended up being a really tortured heroine, almost Gothically so, and the perfect match for Julian.

I loved everything about this book. The descriptions of India. The cold parlors of the English upperclass. The murder mystery and the danger. The art. The heists. The sexual tension. The hero. The heroine. The side characters. The villain(s). The smut. Basically everything. This is a keeper.

Thanks so much Heather for reading this with me! (Make sure you check out her review, too.)