The Perfect Poo: A Fiery Fecal Romance by M.J. Edwards 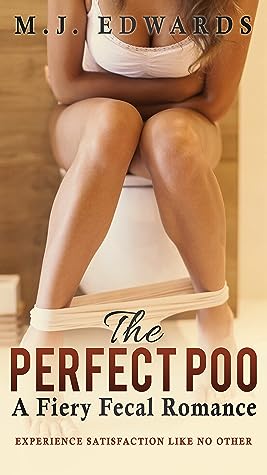 Stella picked up her poo and rocked it in her arms. She tapped it, shook it, gave it the kiss of life (19).

Some of you may know M.J. Edwards from her coronavirus erotica that went viral. Enough people heard about it that even non-book YouTubers used it for talking points. Well, now she's moved on to poop.

Our heroine, Stella, is petite and perky-boobed and has the personality of a water faucet. She has two hobbies: cartography and being constipated. Her BFF is totally sympathetic and takes her out to a pizza place to order a pie called the "Vesuvius" which is an irradiated bioweapon filled with hot throbbing peppers and more juicy phallic symbolism. It does the trick, and when Stella comes home, she takes the shit of her life.

Who's also the love of her life.

Instead, Stella buys a pram for the poop and takes it out to the store and all sorts of other places, like it's a cute kitten in a bonnet and not a scatological midlife crisis. People just don't understand their love, but that's okay. They have each other-- until they don't. Sob, sob. It's like ME BEFORE YOU... with poop.

P.S. This was the best/worst line in the book:

they both were wearing nice tops that showed off their boobs, because both of them had nice boobs and when they stood next to each other it looked like this: OOOO (7).