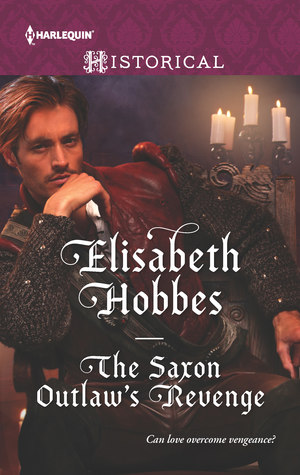 I just realized that the guy on the cover kind of looks like Alex Moffat and if you are going to be kidnapped by someone in Medieval England, I suppose you could do worse than an Alex Moffat lookalike. And Aelric, the hero, is definitely a medieval bae in the extreme.

THE SAXON OUTLAW'S REVENGE is easily one of the best Harlequin historicals I've ever read. Partially because the story is so much darker and more unique than the paint-by-the-numbers ones that grind through the mill. The story starts out with a brutal execution as a corrupt Norman lord seizes the lands of a Saxon family. Constance, the heroine, is the sister in law of the lord and the lover of the youngest son of the now-ex-noble family, Aelric. She saves him from death and helps him escape and suffers mightily for it. They were going to run away together but Aelric doesn't know she's been wounded and thinks that she turned on him or sought comfort in favor of betrayal.

Years later, Constance is traveling with escort to-- I think a nunnery? Anyway, they're set upon by Saxon rebels, led by a fierce and Robin Hood-like figure named Caddoc. Surprise, Caddoc is actually Aelric and he hasn't forgotten Constance's portrayal. Unfortunately, he also hasn't forgotten that love thing. He's still attracted to her and she to him, but they both feel betrayed by the other and her now vulnerable position makes her reluctant to trust him at all.

There's also a great plot involving treachery and revenge, tons of will they/won't they? and some truly tragic backstory for the heroine and hero, both. I liked that Constance was disabled, because you don't really see too many disabled heroines in HR (she had a twisted/deformed leg). I also liked all the cartloads of angst that delivered equal cartloads of feels. The only thing that kept this from getting a higher rating was the fact that the story just dragged a little too much and I felt like sometimes the characters could feel a little flat. But overall, I really liked it! I'll definitely be reading more from this author.