I Married A Naga by Regine Abel 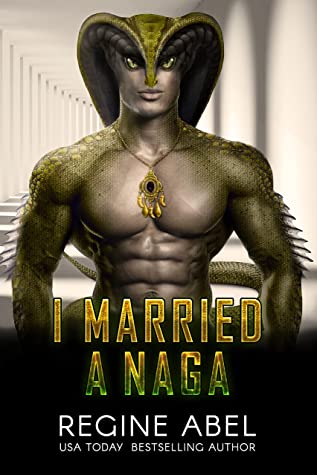 I picked up I MARRIED A LIZARDMAN fully expecting to hate it, so you can imagine my surprise when it ended up being an utterly charming and well-developed alien romance that was basically like a typical marriage of convenience plot with dashes of Harvest Moon in space. I was prepared to snark and struggle my way through the book and instead I was like WHERE'S THE SEQUEL I NEED IT NOW.

I MARRIED A NAGA is a totally different, uh, kettle of snakes than LIZARDMAN. Sequels like this can be hard because book one snags people in for the novelty, but then you don't want to just churn out the same cookie cutter plot for all the sequels, either. That gets old. To my surprise, though, I MARRIED A NAGA has a totally different and, yet, no less exciting plot than the other book in the series.

Serena is a hunter for the federation and they've just been granted exclusive access to a planet filled with snake men called Trangor. The snake men (Ordosians) are allowing them to hunt these menacing scorpion creatures called Flayers that, as the apex predators on the planet, are causing population issues with more vulnerable species. They can hunt in any area that isn't "off-limits" because land is sacred to the Ordosians and punishment for trespass is severe (read: death).

This totally seems fine until Serena sees a Flayer chasing a female Ordosian and her baby. Obviously she can't just stand by and let them both be killed, so she traipses into the forbidden zone to save their lives. And how do they repay her? By hauling her into the clan to punish her for her trespass. Luckily, the Ordosians aren't assholes and the male, Szaro, actually had been watching her hunt and quickly sized her up as a pretty chill lady. So they tell her that there is technically a loophole: if she marries an Ordosian and becomes one of them through marriage, she won't have to die. Hooray!

Like LIZARDMAN, this is also a marriage of convenience, but the circumstances are totally different. I liked that Serena was a hunter and physically active (yoga, rhythm gymnastics). She's also a beast of a woman, standing at 6'1", which as a tall lady (although not that tall!), I really appreciated. The way that Szaro and Serena bond over hunting and their mutual love of the land is honestly enchanting. It's like an interstellar park ranger romance. How can you hate on a park ranger? YOU CAN'T.

There's some intense last-act drama involving some poaching where you get to see just how shit-in-your-pants terrifying Szaro can be when his fangs are bared, along with some relationship tension (no spoilers). I love all the creativity that goes into these books and the world-building. It really makes such a difference and makes the books feel so much more immersive. All the anatomical details (ribbed for her pleasure, ladies) and the cultural misunderstandings were really interesting, and unlike some of these bizarro romances where I don't get the hype (I'm looking at YOU, MORNING GLORY MILKING FARM), with these books I can totally understand why people love them as much as they do. I can't wait to read the follow-up, I MARRIED A BIRDMAN.