Crash Override: How Gamergate (Nearly) Destroyed My Life, and How We Can Win the Fight Against Online Hate by Zoe Quinn 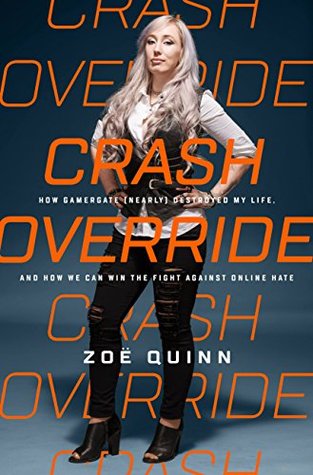 I've been interested in reading CRASH OVERRIDE for a while but I was also wary of picking it up because even though the subject matter sounded incredibly important, it also sounded like a lot. Like Anita Sarkeesian, Zoe Quinn was the focal point of targeted online abuse from trolls that ended up disrupting her life. This memoir is all about what happened to her, but it's also kind of a self-help book about practicing good internet hygiene, acting with civility online and offline, and also about her passion for games and web culture.

CRASH OVERRIDE is very well-written. I'm honestly amazed that she could write such an emotional story and still seem so calm. I felt so bad about what happened to her and I think this might be a hard read for anyone who has depression or has experienced bullying. Even if you haven't, it's a lot to take in, and I kept having to take breaks to process what I was reading.

Content-wise, it's kind of like a cross between Felicia Day's YOU'RE NEVER WEIRD ON THE INTERNET (ALMOST), Chanel Miller's KNOW MY NAME, and Lindy West's THE WITCHES ARE COMING. It's simultaneously a love letter to gaming and geek culture while also condemning the bad actors who make it an unsafe space for women, the LGBT+ and people of color, and it analyzes the sociopolotical topography of the communities who make up said bad actors and how they relate to gatekeeping in the geek and game industries and contribute to the alt-right political scape.

Overall, I liked this book a lot, although I do think it fizzled out a little at the end. I got the impression that maybe Quinn wasn't sure how to end her book-- on a self-promotional note, a hopeful note, or a cautious note? I think it's great what she does with her nonprofit community (?? actually I'm not sure if it was nonprofit, or if she just does a lot of pro bono work, but that wasn't the most interesting to read about. It was definitely helpful to end on a note about how to respectfully support people who end up being the targets of this kind of abuse, though. So a 3.5 feels fair to me. I'm not sure I'd read it again but it's the type of book that everyone should read, if that makes sense.