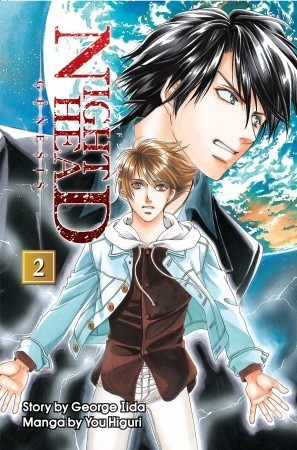 THE FUCK WAS THIS.

Night Head Genesis is a manga series about two psychic brothers, Naoto and Naoya. Naoto, the older one, is a powerful telekinetic. Naoya, the younger one, sees visions and when people touch him, he can read their minds. In the last book, they save mankind from a postapocalyptic plague, but this volume takes an extra big turn for the weird with the introduction of yet another villain and a bizarre magic forest scene that's a total WTF moment.

The villain is a psychic named Sonezaki who can perform mind control and he's a huge dick about it. If you have seen Jessica Jones, he's a lot like David Tennant's Kilgrave. He travels around with this creepy hooded guy who is basically a living psychic video camera. After getting into a psychic dick-swinging contest with our boys, they end up speeding off to the psychic research center where they were raised after their parents sold them into psychic slavery. We find out that it's been destroyed by MORE evol psychics who want to punish him for basically being a Nazi scientist. And he's like HELP. And Naoto and Naoya are like WHY THO. Which is a totally valid question to ask a Nazi scientist.

Anyway, they save him and then Naoya finds out that he has even moar psychic powers! And also people apparently only use 30% of their brains (as someone who tutored neuroscience, this literally pains me) and people who use more actually become psychic batteries that lose the need for corporeal bodies. So if you become psychic enough, you turn invisible! Or something. Also forest magic deus ex machinas are totally a thing. ALSO civilizations were MORE advanced in the past, apparently, and people from Atlantis and the Mu Continent came from space! (I feel like I'm quoting an anti-vaxxer conspiracy theorist's Twitter posts or something, but here we go.)

I finished the book and I was entertained but I don't think I'll be seeking out the other books in this series. Night Head Genesis is FUCKING WEIRD, y'all.