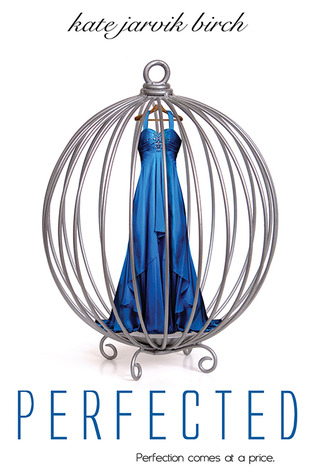 I'm currently trying to audit my book collection and get rid of anything that doesn't strike my fancy. PERFECTED is a very strange book, kind of in line with those chick-lit dystopians that were popular a while back-- books like THE SELECTION, THE JEWEL, or MATCHED. In some ways, PERFECTED is like the poor man's HANDMAID'S TALE: it takes place in a dystopian near-future where genetically modified human girls are bred in special "kennels" as pets for the super rich.

Our heroine-- who is named "Ella" by her adopted family-- is taken in by the very congressman who approved this rule. He's also creepy as all get out. Like, right away, Ella starts getting warnings from both his children about his creepiness, which is super awkward and uncomfy. I don't think this is supposed to be a comfortable read but the tone in which it's written (light, breezy, vapid) doesn't really fit with the dark subject matter. The result is jarring and doesn't really work.

Some of my friends really hated this book and some thought it was an underrated gem. I think how you feel about it will depend on whether you really like those girl-targeted dystopian novels I mentioned. Maybe a teen girl would enjoy this more than I did. I didn't hate it and I didn't think it was bad, but it's also really not to my taste and the writing style didn't work for me at all. Next.