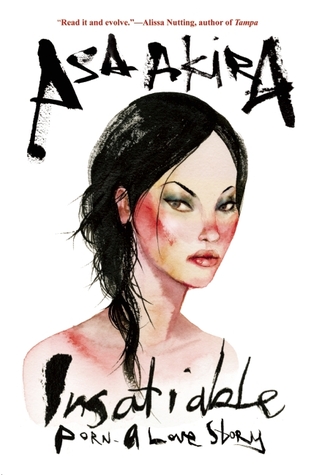 This is actually my second go-round with this book. I received a copy of it when it first came out as an ARC and felt like rereading it, so I bought a copy not too long ago when it went on sale and decided to revisit INSATIABLE. When I first read this book I was in my mid-twenties and easily shocked. Now I'm, well, not. In my twenties or easily shocked. In fact, I was able to read through all of the grittier portions of this book while eating, gory details and all.

I've read a couple other memoirs by adult film stars, most recently Linda Lovelace and Jenna Jameson, and I feel like their stories were a lot sadder and it seemed like they had more regrets about getting into the business. Asa Akira, on the other hand, enthusiastically loves her job and unequivocally embraces her sexuality, which makes this memoir fun to read and, I guess, makes her very popular with her fans. She writes about her wild but happy upbringing, and about her parents, who seem bewildered with her career choice but still try to be supportive. But the bulk of the memoir is about sex work and being an actress in adult film.

Since I'm hoping to cross post this to Amazon, I can't go too into detail in this review, but let's just say that too much detail doesn't seem to be a phrase that exists in Ms. Akira's vocabulary. She is remarkably open about everything, whether it's about catching an STD on set, her stress about developing cystic acne, or what it was like dating and being married to another adult film star. She's not PC at all but it adds to, rather than detracts from, her charm, and I found her candor refreshing. Especially since she talks so much about an industry that is largely hush hush. I found it fascinating to learn about the hierarchy of different adult film actors/roles, what clean-up looks like on set, and what it takes to become successful in the types of role(s) she had.

Sex work is something that is still largely stigmatized in the U.S. so it's great to see a memoir that tackles the subject without (m)any regrets. It's a job, ultimately, and like most jobs, you won't get very far if you aren't a consummate (pun intended) professional. I think it's also important to note that people working in adult film seem to have fans with major boundary issues. She talks about an upsetting incident in an airport where a fan touched her inappropriately; I was watching an interview on Cracked with adult film stars and a lot of them talked about how people (mistakenly) assume that since porn actors make movies where their bodies are on display, that means they're basically fair game. I am sure that there are a lot of similar #MeToo stories about women (and men) working in adult film, and people need to understand that this really is NOT okay. That these men and women are doing a job and whether they're on or off the clock, consent matters, and being unclothed is not a substitute for consent.

Overall, this was just a really, really good memoir. I think I actually enjoyed reading it more this second time around than I did the first time. Asa Akira is a really interesting woman with a really interesting job and I feel like she'd be super fun to sit down and have drinks with because I bet she has the BEST stories. I can't wait to pick up her other memoir.