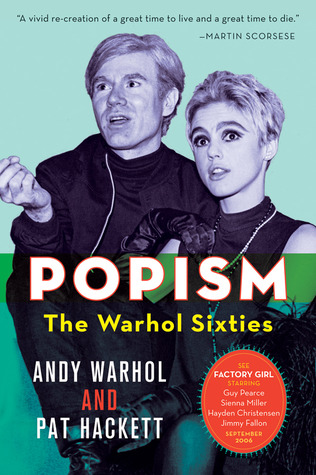 Things Andy Warhol wants you to know about the 60s, basically:

♦️ It's not stealing if it's aaaaaaaahrt.

♦️ California is not as cool as New York.

♦️ Jim Morrison is really, really nice but he stole his trademark look from one of Andy's friends and no, he never shut up about it.

♦️ Jasper Johns might be a big meanie for not thinking Andy Warhol is cool enuff.

♦️ Everyone cool does amphetamines and LSD is lame.

♦️ Everyone in the 60s was bad with money.

♦️ The Velvet Underground threw poop out the window.

♦️ If you grew your hair past a certain length in the 60s, buttoned-up squares lost the ability to see gender.

♦️ Women are more interesting if they have psychological problems.

♦️ Paper dresses are definitely going to catch on one day.

♦️ You can't gossip about yourself.

♦️ The best way to set Judy Garland off is to tell her she can't act.

♦️ Always travel with an entourage.

This book was fine. I bought it on sale because I love Andy Warhol's art work and I wanted to learn more about the person behind the art. He's a good writer but tends to ramble, and after about halfway through the book, I finally started to skim. You can definitely tell he has an ego, and while maybe that's warranted, it becomes a little exhausting to read. POPISM is a tome of name-dropping, self-congratulation, and highlights of the 60s zeitgeist, with famous people flitting in and out before a backdrop of excess, psychedelics, and, yes, art. I did ultimately end up liking this but I probably wouldn't read this again. My ultimate takeaway is that Andy Warhol is a gossipy jerk but he's the gossipy jerk you want to sit next to, although you probably wouldn't want to invite him over to your house or he might nick your sugar bowl and/or sign his name on your soup cans.