Finlay Donovan Is Killing It by Elle Cosimano 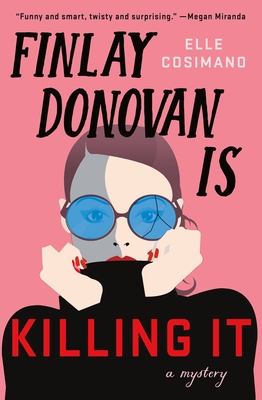 When I first say FINLAY DONOVAN IS KILLING IT, I was a little worried because it seemed like it might be one of those quirky, trying-too-hard-to-be-funny mysteries that inexplicably end up topping best-seller charts despite being, um, not all that great. But the hook of the story kept living rent-free in the back of my mind. I mean, I'm an author who also writes dark and gritty things and HOW OFTEN have I had conversations with others about what I write that could actually sound preeeeeettty terrible if taken out of context? Which is exactly what happens to Finlay, when someone overhears her talking to her agent about her murder mystery and mistakes her for a contract killer, which results in a paycheck filled with dirty money and a whole lot of trouble.

The whole time, I kept picturing this book as a movie in my head. It has the perfect blend of suspense, witty dialogue, and action. I've read one of this author's YA mysteries and quite enjoyed that, but this one was even better. Which makes sense because she published the other one a while ago. If you were reading the reviews for this one and also thinking, "Oh no, here we go again," don't. It's actually a lot of fun and I'd recommend it to anyone who's into books like Katherine St. John's or Gillian Flynn's. Gritty beach reads, I call them. For the morbid goth who enjoys sitting poolside.

Finlay is a really likable and relatable protagonist. Her life is pretty suck. Her husband has left her for a prettier, more successful woman. She has two kids who are high-maintenance and don't really appreciate her sacrifices. She has bills to pay and a job that nobody takes seriously or respects. Her struggle will resonate with literally thousands of women, and obviously, it's made her a little crazy. Crazy enough to actually take up the mysterious murder contractee? Maybe. I found myself really invested in her story from the beginning and ended up breezing through the book in under a day. THANK GOODNESS THERE'S A SEQUEL because that cliffhanger is... whew.