On the Edge by Ilona Andrews 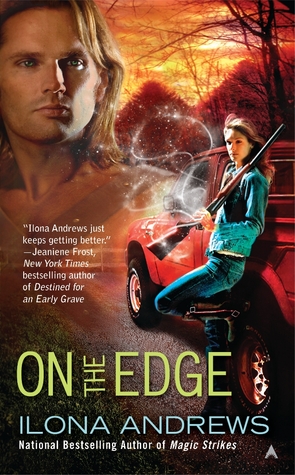 On a scale of five Hidden Legacies, ON THE EDGE rates 4.5 Hidden Legacies. It is not quite up to par with Hidden Legacy but it is very, very close. One of the things I love so much about the Andrews's books is not just the world-building (although also the world-building!) but the heart. They build these huge casts of characters with complex relationships and you can just picture them so clearly in your head, like scenes from a movie. I loved Hidden Legacy because of Nevada's relationship to her family, but I think I love Rose and hers just as much-- if not more.

The world of the Edge series is really unique and interesting. There are three realms: The Weird, The Edge, and The Broken. The Weird is a fantasy realm filled with magic that is a mirror of our world. It has a similar but alternate history to ours, with different outcomes paralleling our own historical events. The Broken is our world, as we know it. No magic. Just drudgery and electricity. The Edge is the narrow band between them where anything is possible and the two worlds can commingle. The people who live there take care of their own and have a complex hierarchy of family grudges and debts to pay.

Rose Drayton has always lived on the Edge. She has a very messed up family and now she is the sole guardian for her two brothers, a shape-shifter and a necromancer. Rose is also incredibly powerful; she has the ability to flash white, in powerful bursts of magic. But because of her lowly origins, people have been trying to force her into marriage contracts or even sell her into servitude and she's had to learn to fight to keep her freedom. Which is why, when a noble from the Weird, walks into her life, Rose's first instinct is to attack first and ask questions later.

Declan is arrogant and dangerous and has magical abilities that rival her own. He claims he wants to take her as his bride and ends up forcing her into a bargain where she has to give him three "impossible" challenges to prove his worth. The challenges end up taking an interesting turn when a new threat other than Declan rears its literally ugly head: "hounds" that devour magic and people with equal fervor. The secret of the hounds is related to Declan in a mysterious way, and Rose must fight her growing attraction to Declan even as she battles the evil that threatens to consume her entire home.

So I loved this, obviously. It's nearly two in the morning and I stayed up all night to finish this book on a work night because it was SO FREAKING GOOD. Like, I don't know what I was thinking only giving this four stars the first time I read it. It's a five, easy-peasy. Rose is such a great character. She's the epitome of a butt-kicking heroine, and I loved the way she stood up for herself and her brothers, and how much they loved her in return. The romance was slow-burn and a DELIGHT. The action was cinematic in scope. The tension and the suspense were A+. And the villain was pee-in-your-pants terrifying. Literally the only flaw was that Declan didn't quite make it to my "best heroes ever" list and the final battle was a little anticlimactic. But everything else was amazing. Especially that ending.

Thank goodness I own all the other books in the series! BAYOU MOON, here I come!