One Touch of Scandal by Liz Carlyle 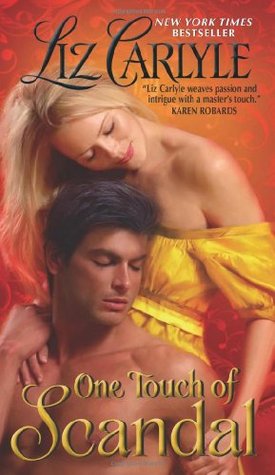 So after reading this author's other book, THE DEVIL TO PAY, and absolutely loving it, I waltzed right over to her backlist on Amazon and bought every single book that was under $3.99. As one does. Liz Carlyle had quite a few titles fitting this description, and among these were the first three books in the Fraternitas Aureae Crucis series. ONE TOUCH OF SCANDAL is the first book and the premise is a little confusing at first and it takes a while for the story to really get rolling.

First, there's a prologue that takes place two hundred years before the main story and doesn't really come into play until the end. Then we cut to the "present" day, in Victorian times, where the heroine, Grace Gauthier, has just found out that her employer/fiance has been murdered. As if that's not bad enough, the circumstances make her look guilty,

Before her father's death, he told her the name of a man she could seek out if she ever needed help. And seek him out she does, except instead of encountering Lazonby, she finds herself nose to nose with the dark and inscrutable Adrian Ruthveyn, instead. A dark and tortured and, yes, dangerous man, he is nonetheless moved to assist Grace and keep her out of the clutches of the police. But such help can only come at a high cost.

So let's talk about why this book was great!

🌙 The spicy sex scenes! As with THE DEVIL TO PAY, this book had incredibly written sex scenes that were the perfect blend of emotional and intense. An added bonus for some readers is that while DEVIL TO PAY had a scene of forced seduction, this book did not. The heroine actually initiates a lot of their interactions, which I think many readers are going to find incredibly refreshing. YAY.

🌙 Supernatural secret societies! I actually wasn't expecting a paranormal romance when I got this book but it ended up working for me. The hero is part of a group called Fraternitas Aurae Crucis, and their missions statement sort of confuses me, but basically they are guardians who protect women and children with Gifts that descend from this woman who had magic powers-- I GUESS. The only downside is that men with the Gift have to protect themselves. SORRY SUCKER. Our hero is one of these and his powers seem to be empathy (the ESP kind) and clairvoyance.

🌙 Biracial hero! The hero is half-Indian. And yes, the cultural ramifications of this are actually mentioned and discussed in some detail.

🌙 The hero's relationship with his sister and nephews! I mean, we all know why they're there. To show that the stoic and tortured hero has real emotional depth. But Anisha, the sister, was so cool. Single mom who's mega into astrology and not in the "oh my God, I spilled my coffee and told my boyfriend I hate him, I am SUCH a Gemini!" sort of way, but in the mystical, mysterious way, because she has the same psychic gifts as her brother maybe. Whatever. IDK. The friendship she ends up forming with the heroine, Grace, is really nice and made me think of the one in DEVIL TO PAY.

🌙 Murder mystery! I am a sucker for a good romantic suspense and this has some great ~fall vibes~. I actually think swaths of it take place in fall because I think the book ends in winter. The suspense kept me turning pages during the slow points and the Gothic, looming feel of the whodunnit combined with the yellow and orange covers of the cover really made me feel those pumpkin spice fuzzies.

So what about this story DIDN'T work? It was slow. Slow to get into, slow in the middle, slow to wrap up. Just slow. I don't mind slow if it fits the pacing of the story but it didn't really feel that great here. I also actually wished that some of the side characters had gotten more air time, like Bekeldi, one of Ruthveyn's associates, and Lazonby, who has a secret that makes him really interesting.

I also felt like Grace was pretty passive. She was just kind of there, whereas Sidonie from THE DEVIL TO PAY stole every scene she was in. I liked that she had agency in the sex scenes but everywhere that wasn't the bedroom she kind of came across as a dolt. Adrian was hot, but he got a little too angsty to really make him a favorite, and the fact that she was the only person he couldn't read really gave this book some TWILIGHT vibes-- especially with his "stay away from me, I'm bad for you/but also, I love you more than life itself" angstlord diatribes, which had me rolling my eyes despite his hotness.

ALSO-- the writing... kind of felt lazy. We're told that the hero has a raspy voice so many times that I actually did a search in my Kindle for "rasped" and it showed up over twenty times. There were other repetitions too but that was the one that stuck out the most. I guess you might say... they rasped.

I liked this book a lot and do plan to continue but it could have been so much better than it was with a little more editing. Why yes, I do hold my faves to higher standards. #sorrynotsorry #istillloveyou