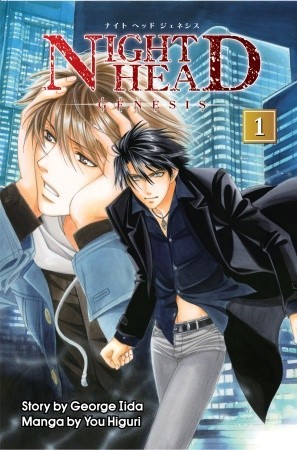 NIGHT HEAD GENESIS is a very strange seinen manga. I noticed a lot of people are shelving this book as yaoi-- possibly because one of them is more masculine looking and the other is more androgynous, and it does kind of look like a romance cover, but the heroes are actually biological brothers so the cover art is kind of weird and doesn't fit the story at all.

Naoto and Naoya are brothers with psychic powers. When they were kids, their parents sold them to a research center but then they ran away and staked out their own living. Nayoa, the younger brother, seems to have "visions." Naoto, the older brother, is a powerful telekinetic. One day, Naoya has a vision of the world ending in a sea of corpses. His vision ends up taking them to a prophet, where their powers amplify and they learn that scientists researching an AIDS/HIV vaccine are on the verge of corrupting their own research by mistake, creating a mutation that will kill basically everyone. Oops.

This story is pretty dark. It's seinen manga, which is the male equivalent of josei: manga meant for college age men and up. I felt like the characters were interesting and the story-telling was decent, although the female scientist was pretty lame. Like, we're talking insta-love in the extreme. She basically existed only to throw herself at Naoto and serve as a rape foil plot device later on in the story. And she's the only female character of import who isn't a villain.

I liked the art and the two brothers, and the ending actually gave me chills, but I'm probably not going to keep this around. It's pretty gloomy and I'm curious to see what the second book does, plot-wise.