The Princess Stakes by Amalie Howard 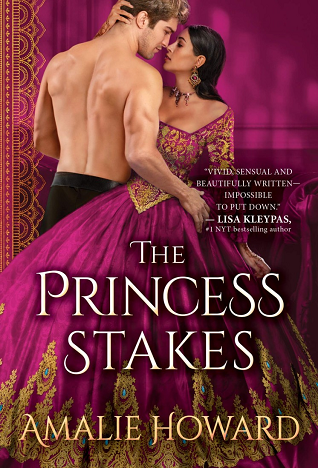 I feel like you can't really discuss this book without bringing up the controversy that happened prior to its publishing. When THE PRINCESS STAKES was still in ARC format (and I think under a different title), some reviewers-- #ownvoices and not-- expressed anger and frustration that the hero, Rhystan, owned a plantation and was essentially a British colonist, and the heroine, Sarani, who is half-Indian, half-British, had internalized British colorism and racism in her own views about the world.

While I don't wish to invalidate the very real and visceral reactions this might have caused to some readers, I also don't think that such content itself is inherently problematic. Why? Because those things actually did happen in history, and the author herself is of Indian descent, and people have different ways of reclaiming their history and pain, and if it was empowering and validating for the author to express those feelings in the characters in a constructive way while also spreading awareness of REAL events and their repercussions in history, then I don't personally see a problem with that. Just because a character feels something doesn't mean the author endorses it. And history is problematic. Talking about it is how we learn.

History is also all about framing and I think there is a mistaken assumption among some readers that (1) authors who write about characters doing bad things somehow endorse those bad things and (2) authors of color end up being inadvertent ambassadors to their culture and are put up on a pedestal until they misstep and then people are remarkably quick to push them off. Something similar happened with Amelie Wen Zhao's BLOOD HEIR, a book that was also delayed from publication while the author "fixed" the problematic content that was being called out. Also, (3) people seem to think that a black vs. white view is necessary for history, with one side clearly being "good" and the other side clearly being "bad." And while you can pretty clearly state that colonialism is bad, the people participating it were real human beings and human beings existed on a spectrum, operating within the framing of morality that existed at the time which unequivocally stated that colonialism was acceptable (even though that's gross). Sticking your head in the sand doesn't negate the fact that there were people going around who believed themselves to be good people and might have even performed acts of good who were nonetheless acting as oppressors on someone else's native land. Whether you want to read about that or not is up to you, and whether it's endorsed or not by an author can be subjective and up for debate, but in this case I really don't think the author was going "Yay, colonialism!" (based on the quotes I read from the ARC) and I don't think it's necessarily a bad thing to try and historically and accurately portray that sort of sentiment as long as the author exercises caution.

What makes the case of THE PRINCESS STAKES really sad for me is that the author issued an incredibly gracious apology (that I personally don't think she should have needed or been required to give) and a lot of the people who jumped on the anti-PRINCESS STAKES bandwagon don't even seem to be aware of this. People are still shelving this book as problematic and telling others not to read it, because it seems like very few of them have actually gone back to check on the situation to see if there was an effort to fix the problem. So that sucks, and after reading and loving this author's other work, BEAST OF BESWICK, I was completely rooting for this author to succeed.

Sadly, I didn't enjoy this book. I loved the beginning, which opens up with an assassination and a daring escape, but everything went downhill as soon as Sarani ends up on Rhystan's ship. It feels like a very gutted work and part of me wondered if that's because the author sanded all the edges off out of fear of being controversial. Rhystan is a huge jerk who secretly holds a torch for Sarani, but this actually just makes him look like even more of a jerk because of the way he treats her. Instead of owning a plantation, we now learn that he turned it over to the people who owned the land, which puts him at odds with the actions of someone who forces her to shovel waste on deck and fights with crew members to release aggression. Is he noble? Or is he a brutal antihero? Which is it?

Sarani had so much potential because she is fully capable of seeking out her own agency and fighting for herself, but being around the hero seems to turn her into spineless jelly. One of the reasons I loved BEAST OF BESWICK is because the heroine doesn't let the hero get away with anything and calls him out at every turn. This book, on the other hand, feels like it's full of mixed messages. I really tried to stick it out because the author seems so nice and I'm loving her Everleigh Duology (I'm reading RAKEHELL OF ROTH and so far it seems just as good as BESWICK), but this is such a miss.

I was trying to think about why this book felt so familiar and it actually reminds me a lot of TILL DAWN TAMES THE NIGHT by Meagan McKinney. They have the same sense of inconsistency and uneven characterization. The upside is, if you like one, you'll probably like the other, so there's that.