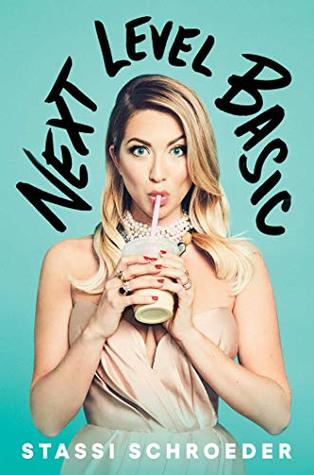 I got this book from my sister who enjoys reality TV and I think she watches Vanderpump Rules. I do not, so I didn't know who this woman was until I looked her up. I have, however, had people call me basic, which I kind of find hilarious because after reading this book, I'm no longer sure if I'm basic or not. I mean, yes, I do have crystals in my purse, but I think anything bought at a Seven Eleven is disgusting and the idea of a vajazzle makes my "flower" want to wilt.

To be honest, I'm not even sure what this book is supposed to be. It's not really self-help, because it's not really solving or fixing anything (except, maybe, distress at being white and basic?), and it's not really a memoir, because so much of it feels impersonal and it isn't really a "story time" sort of book. And it's not a parody or a satire, or if it is, it failed, because it didn't make me laugh and it ended up getting so lost in its own joke that it became the joke.

Schroeder's book is weird because in trying to become self-effacing, she ends up revealing her privilege. Her talking about all-day pool parties and insisting that La Mer is the best facial moisturizer made me roll my eyes. Also, PLEASE DON'T GET A COLONIC. Most proctologists will tell you that they are dangerous and terrible for you, for so many reasons, and unless you need one for some sort of medical procedure, they will absolutely have the potential to do more harm than good. DON'T. Also, I am LOLing that she thinks wearing a "Free Winona shirt" and cheap sunglasses made her a goth when she was a kid. Girl, talk to me when you have a studded belt, spiked bracelet, and bondage pants. Also, how can you hate cats?

I ended up skimming through most of the book. The lists were the funniest parts of the book, but I was a little squicked out that she had a "favorite serial killers" list. Ew. Also, her taste in makeup? QUESTIONABLE. No K-beauty? Also, let's have some talc and paraben awareness, shall we? She gets a bonus point for pointing out how unflattering the Kardashians' clothes are and how it all feels like a joke or a scam or both, but I'm taking away said point because she doesn't think men in sweaters are hot and she's trying to shit on athleisure wear (WHICH IS THE BEST-- IT'S LIKE SOCIALLY ACCEPTABLE PAJAMAS, which, incidentally is why Juicy Couture tracksuits were also the best).

So meh. I think I'll be passing this one along.