The Admirer by Debra Franklin 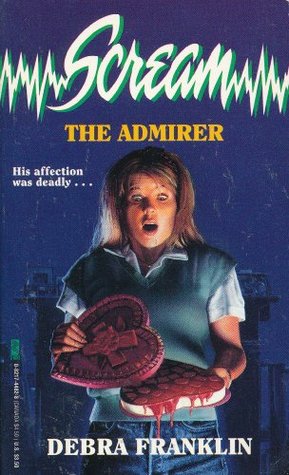 I'm going through some of my old books that I found in storage and deciding what stays and what goes. This book is from the Z-Fave line which seems to be Kensington publishing's attempt to compete with Scholastic's Point Horror line. I haven't read any of the other books in this series so I can't say for sure how well it succeeds, but based on this one, I have to say that it was a pretty solid thriller.

When Duane, Morgan's abusive boyfriend, slaps her for not doing his homework for him, Morgan breaks up with him and declares that she's over men despite her friend Elliott's skepticism. Morgan's ability to hold out lasts approximately a few days before she lands eyes on Neal. Such is the fickle nature of the teenage girl.

At the same time, gifts are appearing on her front porch-- a bottle of her favorite perfume, a cassette of her favorite band, a sexy nightgown in her favorite color. She thinks it's from a secret admirer and at first she's flattered-- but then the gifts start to turn nasty. You know, as things do.

I think I've read this before but so many YA books from this time period revolved around sexually motivated stalkers that it sometimes felt like a sneaky form of birth control ("don't have sex, or you'll get an axe in your head"). The mystery was good. I had a pretty good idea what was going on from the beginning but the author foreshadowed it really well. It also had a ton of really fun dated references, like VHS players, the heroine reading one of Danielle Steel's old novels (Heartbeat), and cars like the Chevrolet Celebrity or the Chevrolet Malibu (I guess the author likes Chevrolets?).

Some of the dated references were less charming, though. There's a reference to something called a "f*g rag", which I looked up and I guess is a derogatory word for a gay magazine. The heroine at one point threatens to put one in her ex's bedroom if he doesn't stop threatening her. It also keeps using the word "pudwhacker," which I'd never heard before, and I guess is a Southern way of saying jerk-off? (The book is set in Kansas.) It's used several times and is kind of surprising to see such words in these YA pulps because in my thoughts they were always tame, but I guess these things just went way over Child Me's head.

The villain, it probably won't surprise you to hear, is a super incel creep, so there's all kinds of abusive language towards women, including numerous uses of the word "bitch."

Overall I liked this mystery a lot and I liked (most) of the dated references. ESPECIALLY the link to the publisher's online chat, which actually invites you to dial in with a modem. I took a picture of that and uploaded it to my Instagram because it was so precious (don't worry, I blurred out the numbers). Would I read this again? Probably not. But I am curious about the other books in the series.