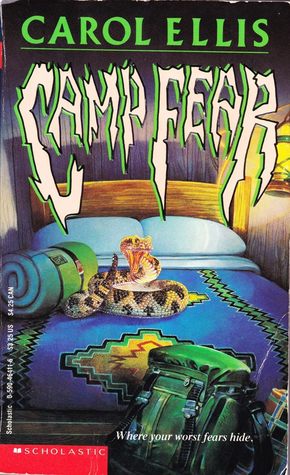 I'm preparing to unhaul some of my middle grade books for a friend so I've been reading through my collection to see what goes and what stays. I don't actually remember reading this one before so it might be one I bought and forgot about. CAMP FEAR is kind of like Friday the 13th for kids. Rachel is a teen counselor at Camp Silverlake, along with a handful of other teens. It seems like a more adult version of regular camping, but it's cliquish-- especially since it turns out most of the counselors know each other from summer camp as kids.

Pretty soon, however, it turns out that things aren't exactly copacetic. The other kids are hiding something and get cagey when Rachel brings up the past. Then when she puts up some old camp photos on a billboard, they freak out. It's clear they don't like the photo, but not why. Then Rachel learns that something bad happened at the camp years ago that the others would dearly like to forget. But SOMEONE wants them to remember.

This was a fun book. It really is a lot like Friday the 13th but without all the sex and gore. I didn't really figure out who did it until the end. The author was trying to force one of the red herrings too hard, which made me figure that definitely wasn't whodunnit. I don't remember reading a lot of Carol Ellis's Point Horror contributions, but she really isn't bad! I'll have to keep an eye out for more of her books.