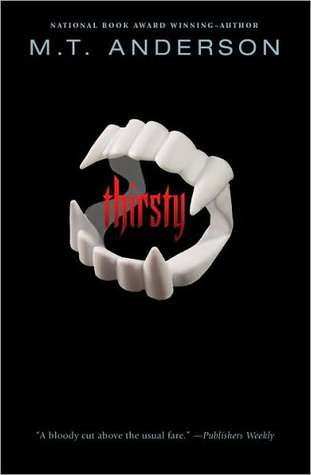 So one of my recent projects that I've started doing is rereading some of the books I enjoyed as a teenager. It's called the literary-sad-girl-canon, and it's filled with all sorts of delightful books from the late-1990s/mid-2000s. For the most part, most of the books Young Nenia enjoyed hold up pretty well, but there's been a few that haven't.

One of the haven'ts is this book, THIRSTY.

M.T. Anderson was, like, my edgy go-to as a teen. I really liked his YA-ed up version of BRAVE NEW WORLD, FEED, so when I found out that he wrote a vampire novel too, Teen Me was all over that like white on rice. I didn't actually remember much about the book except that it was really fucking weird... and I stand by that opinion.

The premise is kind of hard to explain. It is set in this AU world where vampires exist and are executed publicly if caught. The hero, Chris, lives in a town that is responsible for the banishment of the vampire lord, Tch'muchgar, and every year during the Sad Vampire Festival, they re-banish him with a spell. But this year, vampires are scheming to disrupt the festival and free their lord, which is where Chris comes in.

Chris, for whatever reason, seems to be turning into a vampire. And he comes between the factions of Light and Darkness who want to use him as a pawn in their games involving the lord, and don't really care if they need to lie to him to do it. The tone of the novel is very dry and seems mostly done for comedic effect, but there are some dark moments, too. Especially as Chris's vampirism takes hold. At times, this feels like bizarro fiction that was written for a YA audience, which is basically what it is.

If that sounds interesting to you, you might like this a lot. I don't think I liked this all that much as a teen (I think I gave it the same rating then that I'm giving it now), but for the right audience, it will be great. Especially if you like Darren Shan's Cirque du Freak series.