In the Role of Brie Hutchens... by Nicole Melleby 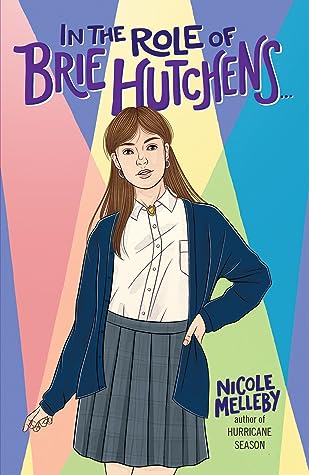 I was cleaning out my bookshelf and found this book, which I won in the Goodreads Giveaways a year ago and never reviewed. WHOOOPS. Better late than never, I guess? Anyway, here I am, finally getting to this ARC because I felt bad for letting it slip through the cracks.

IN THE ROLE OF BRIE HUTCHENS is about a middle schooler named Brie. She goes to a Catholic school and is obsessed with soap operas (my girl!). The beginning of every chapter opens up with an epigram that summarizes a Big Dramatic Moment from various soap operas, which I thought was REALLY cool.

Even though they aren't super well off, Brie's family is able to send her to the school because her dad is the janitor. Brie is super embarrassed about that. She's also embarrassed about the fact that she sees girls in a way that her mother and her best friend don't seem to. When her mom catches her looking at the naked photos of a soap opera actress, Brie blurts in a panic that she's been given the prestigious role of "crowning Mary" at the celebration at her school--

--even though she hasn't.

Middle grade novels are a tough sell for me because there's a certain level of brattiness that comes with the genre (it's a bratty age), and sometimes I'm just not in the mood for that. I think some authors also do too much hand-holding in the narrative and I'm not super into that, either. BRIE HUTCHENS was great, though. Brie could be a brat but all of her concerns were super relatable and I loved the way the author tackled things like money, questioning your sexuality, and talking about important subjects with your parents.

Anyone who likes LGBT+ books and middle grade will probably enjoy this one. I just read it after ZARA HOSSAIN IS HERE, which is another YA sapphic book about first girl relationships, and that pairing actually really works, so I'd definitely recommend reading them together. ZARA even takes place in a Catholic school, too!