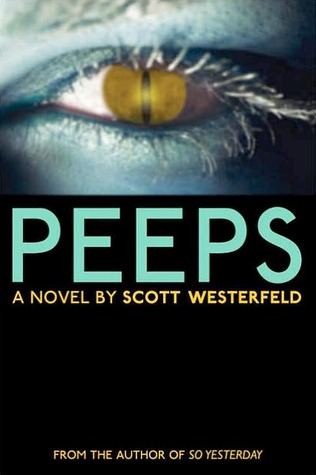 Before TWILIGHT, it was actually super hard to find books about vampires, which was sad for Teen Me, who has always kind of been obsessed with/fascinated by vampires. I craved books about fanged monsters and it was just so hard to find them. That was why I knew I had to reread peeps for my literary-sad-girl-canon project; it's one of the first vampire young adult books I remember reading as a kid and it really left an impression on me, because it was so different than the rest.

PEEPS is about a Texas-born man named Cal, who is an older teen and works for an organization called the Night Watch. He's a hunter of vampires, only in this universe, vampires are caused by a parasite infestation and are referred to as "peeps" (shorthand for "parasite positive"). His job is to track down and haul in people who have been infected, starting with his own ex-lovers. Because one of the ways the parasite spreads is through sexual contact and Cal just so happens to be an asymptomatic carrier.

Interspersed throughout the novel are all these really interesting trivia facts about parasites told in a matter-of-fact, tongue-in-cheek way that kind of reminds me of zefrank1's YouTube channel (if you haven't seen it, it's a must-watch). Meanwhile, Cal continues to do his work, while trying to track down the mysterious femme fatale who turned him (a hot goth woman named Morgan) while also dealing with the nosy Lois Lane-wannabe named Lacey who lives in the same apartment his ex used to live in and won't be put off by easy explanations.

I just loved this book so much. Some of the books I enjoyed as a teen really don't hold up all that well, but this one really did. The science and the research that went into it is so well done and I totally bought most of the author's explanations. The climax was a little weird-- but oh well, it was a fun ride, so I don't really care. Still, it is why this is getting a four-star review instead of a five. Even so, I think this would make for a great movie or TV show. It is so visceral, you really get a feel for what it would look like on the big screen. When Cal explores the subterranean depths in particular, it's chilling.

If you're tired of the usual vampire stereotypes and want something novel, gritty, and different, this is the book for you. I liked that Cal is a pretty nice guy and he's a great narrator. Unlike 99% of other male narrators, it's easy to see why the women-folk fall for him.