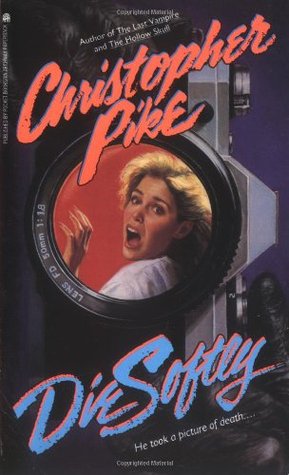 What if I told you that this book was about cocaine?!

DIE SOFTLY was in a bag of books that was in my garage. I'm currently doing an experiment where I reread some of my old YA books and see how they hold up to my memories of reading them, but I actually have zero recollection of reading this book, ever. Because it is CRAY-CRAY.

Herb is a loser at his school. He has one friend, an overweight girl named Sammie. They both hate the popular kids. One day, Sammie gets an ingenious idea. Rig up a camera and photograph the naked cheerleaders in the locker rooms. Then distribute them to the student body as revenge! Hey, it's the early 90s! This won't be considered a sex crime for YEARS!

Obviously, Herb and his permanent hard-on think this is a great idea.

So Herb does his little camera "trick" and one of the cheerleaders dies mysteriously. Then when he develops the photos, he notices something funny. It looks like he might have captured the moments leading up to the cheerleader's murder. Uh-oh.

I was not prepared for how INSANE this book was going to get. It's got references to sex, child abuse, bondage, and cocaine. I remember the Point Horror novellas being pretty tame, so the fact that this one was so unabashedly crazysauce was kind of a shock. Christopher Pike always wrote darker books but I'm kind of amazed that such things made it into a middle grade book of the early 90s.

The ending was even more fucked up and over the top. I can kind of see why this one is out of print.