The Crown Lord by William Sirls 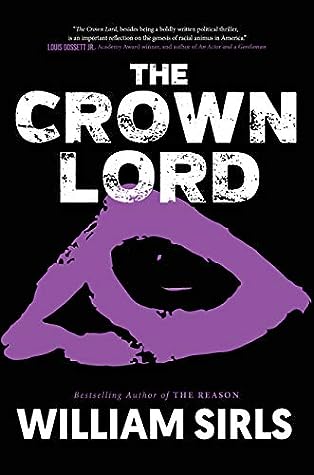 My friends and I have been exchanging bags of books over COVID and this is one of the books that was in my most recent delivery. It's one of those books set in an alternative universe where Black people have all the power and white people are oppressed, which I think is always a tricky subject to deal with because it's not like it's a past event that's been resolved, like the AUs that ask: "What if Kennedy didn't die?" or "What if Jews fled to Alaska during WWII?" It's not like racism is some past historical event that no longer exists. But despite that, I can think of two other books right off the top of my head that have the same premise. One is called SAVE THE PEARLS, which was written by a white woman, and the other is called NOUGHTS AND CROSSES, which was written by a Black woman. SAVE THE PEARLS got mostly negative reviews from my friends, whereas NOUGHTS was mostly positive. As with most books, who's writing it and how matters. CROWN LORD was written by a white guy, which made me a little nervous, but I decided to try it anyway.

The premise is pretty simple. After a successful rebellion in the 1800s, Black people were able to wrest control from white slave-owners and turn the tables, leading to Black people being the primary economic and social power-holders in the contemporary age. The hero, Willie, is a young teen whose father is a lawyer gaining notoriety for defending a white man in the murder case of a Black man. After an unsuccessful verdict, his father is murdered and Willie is sent to live with his uncle in Michigan, who is living with a Black woman and a mixed-race son, much to Willie's disgust. In his uncle's town, he learns more about this group called the Crowns, which is a Black Supremacist group that has it in for white people, who they slur as "pinkies."

The whole book is about Willie learning to recognize his own prejudice and weaknesses, confront his emotional hang-ups, and also figure out who really murdered his father, while also working to stop the Crowns from their stranglehold on the town. It's a lot... and I wasn't really sure what to think about it, although I read the book in a single sitting so I guess I found it entertaining? The writing wasn't the best at times. The author has this weird tic where he doesn't write out contractions. So instead of "you're terrible" or "that's not good" he will have the characters say "you are terrible" or "that is not good," which made the dialogue sound really artificial and kind of robotic.

Regarding the racism and the world-building... eh. I don't think it lacked the nuance of SAVE THE PEARLS, but I also don't feel like it was completely successful in how it tackled racism. This one line at the end kind of cinched it for me, where Willie says, "...I want to believe that if the shoe was on the other foot, or if things were the other way around and whites had the upper hand, that there is no way that they would mistreat blacks as bad as we mistreated them" (319).

It was an interesting experiment but I wasn't a huge fan of it. But it also wasn't the shit-show I thought it would be. I can definitely understand why people hated this one, but I can also see why people liked it.