Confederates in the Attic: Dispatches from the Unfinished Civil War by Tony Horwitz 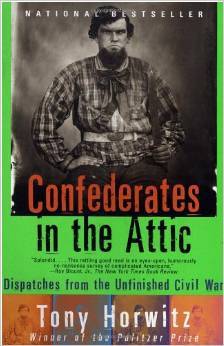 I bought this book about ten years ago and then forgot about it. While going through my shelves, I thought it might be interesting to read and at first it was but probably not in the way the author intended. CONFEDERATES IN THE ATTIC is basically a written documentary chronicling the South's obsession with the Civil War and how they revise and glorify their own history to further their own ends. Whoever said "history is written by the victors" clearly hasn't been to the U.S. South.

This was published in the late-90s and I'm not sure the author would have taken the same tone had he written this book today. The people he interviews, many of them racists who feel a little too comfortable spouting slurs or using the N-word, are portrayed as quirky characters who are free spirits that don't believe in coloring in the lines and abiding by PC Culture. You just know a lot of these assholes ended up voting for Trump.

And here's the thing: portraying that kind of attitude as harmlessly funny is why we ended up with "fake news" bullshit, partisan stances on BLM and anti-Asian Hate, and January 6th. I'm not blaming the author here, to be clear, but it is sort of a retrospective of how certain parts of the U.S. have kind of festered in their isolationism, and how the rest of the country was content to look askance and leave them to it while chuckling behind closed doors. There were parts of this book that I really did enjoy, like the Black individuals he interviewed for their opinions (and they had some very good and interesting things to say that had the nuance I was expecting from the book as a whole), and the chapter on Gone with the Wind, which had some interesting details about Margaret Mitchell and an Scarlett O'Hara impersonator who looks like a cross between Andie Mcdowell and Vivien Leigh.

This book is very well written and I can see why it won awards but it ended up pissing me off and I am just not looking to feel pissed off when I read a book, unless it's the powering sort of pissed off that makes you want to take action. Definitely doesn't age well and I would be unlikely to recommend.

P.S. Black comedians, Key and Peele, have an excellent sketch about Civil War reenactments and I kept thinking about it while I was reading. TWs: racist Black stereotypes (for satire and political commentary).