You'll Never Nanny in This Town Again: The True Adventures of a Hollywood Nanny by Suzanne Hansen 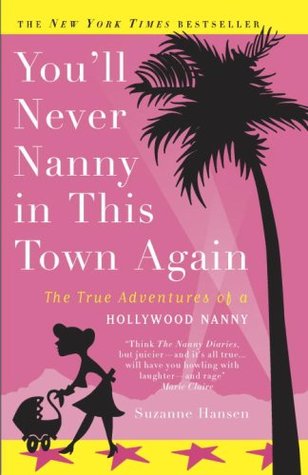 So I'm doing this project where I reread some of the books I really enjoyed as a teenager and then see how they hold up. This book came out in 2003, when obsession with Hollywood stardom and celebrity culture was kind of reaching a fever pitch. Now, because of Twitter and Instagram, the line between public and private life has blurred considerably and celebrities feel much more accessible (we also feel, because of Influencer Culture, TikToks, and YouTube, that it's much easier to become One of Them), but this was still an era where there was kind of an awed respect for celebrities; they still felt like gods.

YOU'LL NEVER NANNY IN THIS TOWN AGAIN is a memoir about a woman who came from a small town in Oregon and then became a nanny to a handful of celebrities, like the talent agent, Michael Ovitz, and his wife, Judy; actress Debra Winger, and then Rhea Perlman and Danny DeVito, before deciding ultimately that the nanny business wasn't for her and she wanted to try her hand elsewhere.

The bulk of the book is about the Ovitzes, and because of Hansen's perspective as "the help," she seems to fluctuate wildly between starstruck awe, helpless gratitude, and disgust at her employers' entitlement. Obviously, this is only one side of the story, and I do wonder what the celebrities mentioned in this book really thought about being mentioned in this tell-all, but Hansen never said anything grossly embarrassing and most of the anecdotes are interesting without being mean. I wish there had been more about the DeVitos and Winter, who seemed charming and down-to-earth, but charming and down-to-earth people aren't as interesting, which is maybe why they didn't get as much page time.

I am surprised at the number of reviews criticizing Hansen for not seeking out a contract. I mean, yes, she should have. But this was in the early days of the internet and research was a lot harder to do, and as a rural Oregon naif, it's not always common sense to think about writing out a contract. A lot of the jobs she had before this probably didn't necessitate drafting one up. I think it's easy to make mistakes like that when you're young, which is why a lot of young people do get taken advantage of, so I think in that sense, YNNITTA becomes a sort of cautionary tale to contractual help.

If you're interested in work-related memoirs and celebrity gossip, you'll probably enjoy this book. It aged reasonably well. I think I gave it four-stars the first time I read it. Now, I'd give it a three.