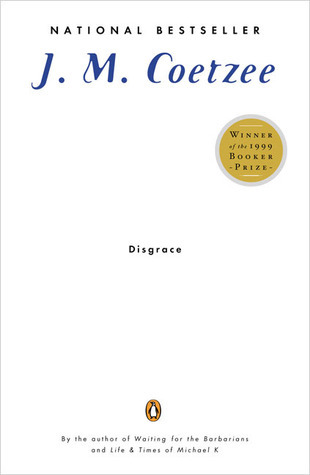 I recently read the young adult book, INEXCUSABLE, which is the story of a teenage rapist who gradually comes to realize that he is the villain in everyone else's story but his own. While reading it, I kept thinking of this book, DISGRACE. Set in post-apartheid South Africa, it is about a man named David Lurie who abuses his position to sleep with and then rape one of his students but refuses to admit any wrong-doing in the act. Later, he goes to live with his daughter, who is raped herself as part of a coup to blackmail her into giving up her land rights.

DISGRACE is a book that I read when I was a teenager and I remember being shocked by the violence and the brutality. It touches on a lot of really heavy topics, such as sexism, rape culture, racial tension, gender politics, and all of these other harsh truths. It was unlike anything I'd really read before, and I remember being fascinated and sickened at what it was like being inside the mind of a rapist who doesn't really believe he's committed rape and who seems to think that his opinion, and no one else's, is the only one that should carry any real authority because he is so thoroughly entrenched in his own privilege.

I do not really think that David redeems himself by the end of the book. Even when his daughter-- in a picture of dramatic irony-- suffers basically the same fate that he imposed on another girl, it's still all about him. He wants to get revenge for her on his terms because deep down, he believes that he is the one who has been wronged. He is outraged that his daughter has fallen victim to African land politics, that she is being treated as chattel, but when he thinks of Lucy, it is always as his daughter, his his his, and her relationship is always defined in terms that relate to him, and what he thinks she should do with her life, whether it's her choice of spouse or how she should go about reacting to tragedy.

I'm not really sure I would recommend this book to others. It is grim. In terms of examining privilege through the use of an unreliable narrator, I would say that INEXCUSABLE is the slightly better book. DISGRACE is beautifully written but the bleak misogyny in the book makes it a bitter pill to swallow. Especially since David doesn't ever really redeem himself.