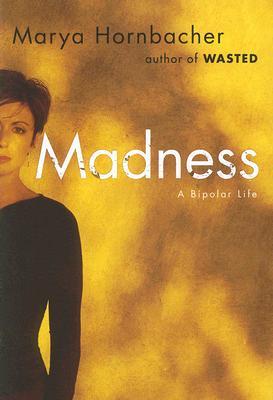 MADNESS has been on my to-read list for a long time. It was on a list of suggested memoirs about mental health that I got from a professor as a psychology student, and while it wasn't the one I chose to read at the time (my choice was THE CENTER CANNOT HOLD), I found myself thinking back to it constantly. When it went on sale on Amazon, finally, it felt like kismet.

Marya Hornbacher has Bipolar I with rapid cycling. She was misdiagnosed at least once and had several issues with her medication. She writes about her mania, hypomania, depression, anxiety, and eating disorders, which were all manifestations of an illness. The way she writes, she manages to capture the breathless, rapid-fire thoughts of a manic episode and the slow, trudging, apathetic helplessness of a depressive state. The fact that she has the ability to introspect to this degree and convey her moods so effectively through words was incredibly impressive and well done, which is probably why my professor included it on the list.

I do want to issue two caveats. The first is that this book has content warnings across the board. The book opens with a graphic description of self-harm and there are several other incidents mentioned. While in the grip of her disorder, she makes a number of questionable, sometimes disturbing choices. I didn't judge her for it-- she was sick-- but it was very difficult to read. People who have the same illness, or who have triggers about overdose or self-harm, may find these passages very difficult to read.

The second is that this memoir is very cyclical. Which makes sense because the disease is cyclical. By definition, bipolar is a cycle of depressive and manic episodes. But it also made it very exhausting and repetitive to read. I did ultimately enjoy this book and really appreciated her writing style, but towards the end, when it just became a series of vignettes regarding her coming and going from hospitalizations, I did begin to skim. I felt really, really bad for her, and sympathized with her trying to come to terms with her diagnosis and the incompetent psychiatrists and incorrect medications that made it more difficult for her to manage her disease, but it was a lot.

If you are interested in learning more about mental health, I really recommend this book. I'm definitely going to check out her first book, which is about her ED. She has a very readable style that is adept at conveying emotion, even if that is the same quality that sometimes makes it tiring and unpleasant to read. If you do read this, I suggest you go into this equipped for the grim content.