A Tiger in the Kitchen: A Memoir of Food and Family by Cheryl Lu-Lien Tan 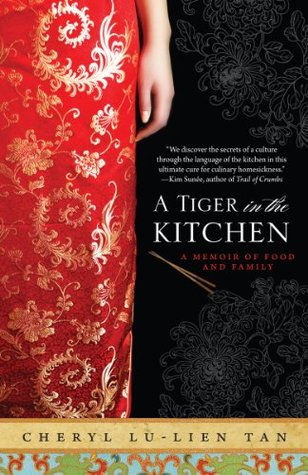 One of my (not-so) secret loves is food memoirs, so when I saw this Singaporean travel/cooking memoir, I knew I just had to read it. Cheryl Tan is Teokchew/Singaporean with family in Mainland China, as well, even though she lives in New York currently and describes herself as fairly "Americanized." In this memoir, she tells her family history, talking about her Singapore and Chinese family and some of their colorful stories, and describes the cuisines from all three cultures that she learned to make on her self-journey to teach herself cooking.

I think the best parts for me were the stories about her family. One of her aunts inadvertently became an opium carrier and several of her family members ran gambling dens. One of her grandmothers did some incredibly complex and traditional Singaporean dishes and the other was the second wife to a Chinese playboy. It's a fascinating tapestry of family details and I really enjoyed those parts of the book.

The cooking parts were a bit more inconsistent and I think part of that is because she was writing this as she was learning (presumably) and a lot of her traditional family members didn't really use recipes, so there's a lot of "I don't know how much of X ingredient goes in here, I just do it by taste." There are some pretty jaw-dropping descriptions of food in here but the tone is inconsistent and the author meanders a lot from subject to subject in a way that is very disorienting.

Overall, I liked this memoir and I would recommend it to foodies (especially foodies who love Singaporean cooking, as I do). But it is a bit of a rough read and I probably wouldn't revisit it.