Manic: A Memoir by Terri Cheney 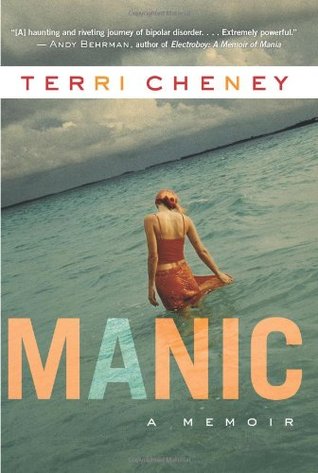 From the first line in this memoir, I knew it was going to be good. As a psychology major, I've been introduced to a lot of memoirs about and written by people with psychiatric disorders. The vast majority of them are really great. I think it takes a certain amount of courage to open up and share such intimate details about one's life, especially if one suffers from a disorder that foments chaotic and dysfunctional behavior. Which bipolar disorder definitely does.

Some of the critical reviews for this book take issue with the fact that Cheney seems full of herself, and while that is true, on the surface, at times, I think it is mostly because she is trying to reflect the self-aggrandizing thoughts that can occur when someone is in the grip of mania. She says at one point herself that she knows how extreme her behavior was, how irrational. In that way, the memoir is almost written as if it were from an unreliable narrator. While writing her book from a stable place, she is trying to accurately reflect both her manic and her depressive states by portraying those thought patterns.

I think Cheney did a really good job on this, to be honest. It's not quite as artistic as Marya Hornbacher's MADNESS, which kind of played with structure and syntax to reflect the breathlessness of mania and the slow plod of depression, but I think that makes sense since Hornbacher was a creative writer/artist type and Cheney, as a lawyer, seems much more practical. Anyone who is interested in learning more about bipolar disorder and what it is like to suffer from it should read this memoir. There are content warnings for virtually everything, including sexual assault, eating disorders, and suicidal ideation, but I thought Cheney handled these subjects with care and open honesty.