Toast: The Story of a Boy's Hunger by Nigel Slater 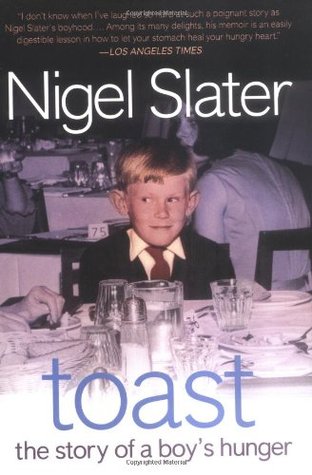 I'm currently doing a project where I'm rereading some of the books I loved as a teenager. The impetus for this project was a long slew of disappointments from new releases I was looking forward to, and the discovery of some of my old books tucked away in my garage. TOAST is especially near and dear to my heart because I used to live in the UK and the copy I found was purchased at a Waterstones. It's an ode to food written by a food critic, but not just the fancy stuff-- here, he sings the praises of things like toast and store-bought trifle, penny candies and cheap gum, Jammie Dodgers, gammon, and all of the food of the working class and how it ties into his memories.

There's a movie based on this memoir and it's really good, but I like the memoir better. It's a lot like Anthony Bourdain's memoirs in how his passion for food and the emotions it stirs tie in to the eating of said food, but Slater is much less pretentious and much more unprepossessing in his tastes. He's not here to impress-- his tongue-in-cheek dry wit really carries the narrative along when he talks about his mother's failed custards and pies, or how marshmallows reminded him of goodnight kisses, or the Brit fascination with food from the South of France.

If you enjoy foodie memoirs, I think you'll really enjoy this memoir. It's so well written and so good. I think I actually enjoyed reading it even more this second time around because a lot of the humor and references went over my head as a teen. There are some trigger warnings for references to grooming and discipline that would probably be considered borderline abusive now (his childhood was in the 60s), and it also deals with the death of a parent as a young age, but it's never too grim and I think there's a real element of hurt/comfort in how Slater writes on all of these topics.