The Party by Christopher Pike 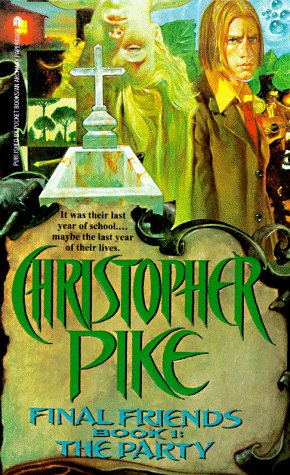 Whoa. This was SO dark. I'm reading through my stockpile of YA horror and I was kind of shocked by how bleak and intense this was. Unlike a lot of other vintage YA horror, which glosses over character development in favor of easy thrills and chills, 80% of this book was about building up all of these characters, getting you to understand their interactions and relationships to each other, which makes the ending even more brutal.

When Mesa School closed, the kids were integrated into Tabb High. To unify everyone, local rich orphans, Polly and Alice, decide to throw a big party in the name of camaraderie. Polly is heavy and boy-crazy but socially awkward and Alice, her sister, is a dreamy artist who, it is hinted, might have psychological problems and an eating disorder.

The other characters are Nick, a young Black man who grew up in a bad part of L.A. and is having difficulty fitting in with his rich white peers; Michael, a nerd who has a crush on one of the pretty new girls and is trying to reconcile his lack of a sex life with that of his very successful player of a friend, Bubba; and Jessica, an ex-cheerleader who is self-aware and self-conscious, all at the same time.

The side characters are Sara, an outspoken girl with an attitude problem and one of Jessica's friends from Mesa; Maria, the daughter of illegal immigrants and Nick's love interest; and Bubba, a really sleazy nerd who has inexplicable success with the ladies and isn't above lies and manipulation to get in their pants. There's also Clark, Alice's creepy and mysterious boyfriend, Clair, the social butterfly of the school and Bubba's love interest, and Bill, the guy Jessica might be into and Michael's rival.

This book was just so well done. I like that it mentioned sex and drugs (not too explicitly) and actually seemed to reflect a modern version of high school and not one of the 50s (the age at which some of these writers likely attended high school themselves-- for example, in this R.L. Stine book I read recently, one of the kids describes a dance as a "hop" LOL). It talks about abortions, illegal immigrations, racism, drug abuse, therapy, and all kinds of other things. As for swearing, it's pretty light on that, although the F-word for gay people is used and one of the racist football assholes keeps referring to Nick, who is Black, as "boy." Neither instance was portrayed as acceptable.

After the murder inevitably happens, the book ends on a cliffhanger of sorts since this is book one in a trilogy. So after all that build-up, you only see the death and not the culprit. I'm really curious to see who dunnit and I loved that this deadly party is described in-text as a locked-room murder (one of my FAVORITE tropes). Thank goodness I have the omnibus edition of this series! I can't wait to read more.