Island of the Blue Dolphins by Scott O'Dell 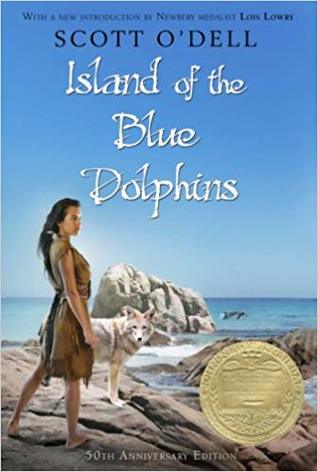 The copy I read is from the 1960s and features a very white-washed version of the Native heroine and a blurb from the New York Times book review that refers to her as "primitive." Oh, history, you racist scamp, you.

I had to read this book for school and thought it would be fun to revisit it as part of my reviewing project. It falls under this branch of children's literature that I think of as "kiddie disaster lit," including titles such as MAROO OF THE WINTER CAVES and THE CAY. Is this book authentic? Who the hell knows. It's written by a white guy and was published in the 60s... so I'm sure he took some, ahem, liberties.

Our heroine, Karana, is part of a Native tribe living on an island (I believe off the coast of California). White people come to hunt otter but after one of them screws over her tribe, they attack and her father is killed. Then one of the scouts goes off somewhere to find them somewhere else to live and on the day it's time to leave, Karana's idiot brother misses the boat, so she jumps overboard to save him.

Idiot brother is murdered shortly soon after by wild dogs, leaving Karana with the run of the place. She's a consummate bad-ass, hunting squid, making her own weapons and clothes, killing the wild dogs who killed her brother and then taming the leader as a pet. Books like this made me realize that I wouldn't be cut out for wilderness life but I kind of enjoyed the vicarious journey although to answer your question, YES the dog dies after she tames it because what the fuck, 1960s children literature. You certainly had a hard-on for killing animal side-kicks, didn't you? If a vintage kids' book has an animal side-kick in it, there's like an 80% mortality rate. I see you, OLD YELLER, THE RED PONY, THE YEARLING, and WHERE THE RED FERN GROWS.

I guess this aged okay and there's a replacement dog that takes the place of the dead one, so yay? I guess if you read this, take it with a grain of salt.