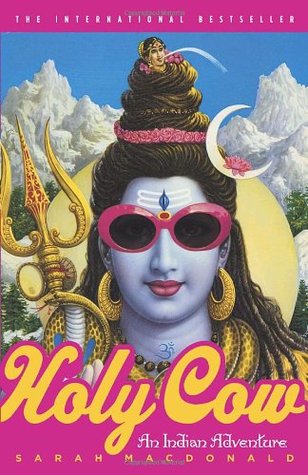 I have very mixed feelings about HOLY COW. On the one hand, it's a memoir about a place I am unlikely to go and it was interesting to see a journalist's take on the people and the culture, since if I can't travel somewhere, it's fun to enjoy it vicariously. But on the other hand, this memoir is very dated (published in 2002) with some very outmoded views towards people of color and she takes a decidedly Western slant when talking about said people and culture that oscillates wildly between ignorant and insensitive. (I would probably vote for ignorant-- in the beginning of the book, she talks about her "dreadlocks" phrase in college.)

Sarah Macdonald is an Australian who ended up going to India because of her boyfriend's work (I think he's an Australian news reporter). As a journalist herself who was fond of travel and backpacking, she had mixed feelings. She went to India as a young woman and had a bad experience, and then, literally and metaphorically flipped it off, vowing never to return. But she ends up tempting fate and going back anyway because she wants to make her relationship work and also because she's curious and the journalist in her hungers for new experiences and stories.

As I said in my opening paragraph, I really liked the travel parts of the book. She met some incredibly cool people in India who had really interesting stories, like the Zoroastrians and their commune, the woman who got married without permission and was cursed by her mother(!), and the people who did incredible physical feats for religious reasons (I forget why and what they were called, but one guy apparently stood up for two years and one guy lifted his hand in the air for one year-- so it was stuff like that). But as other reviewers have pointed out, there's also a LOT of complaining. And she does it in a way that definitely can come across as bitchy and condescending. To be fair, this was the style for comedic travel memoirs of the time. J. Maarten Troost does this in his memoirs too, which were being sold around the same time as this one, and his books in the South Pacific/Micronesia/Melanesia have titles like GETTING STONED WITH SAVAGES and THE SEX LIVES OF CANNIBALS. I'm not making apologies, just giving some historical context. These probably wouldn't be published today-- at least not with these titles and not without a proper editing scrub.

Maybe the author realized she was getting annoying because she seemed to tone down her attitude in the second half of the book. She did whine a little about not being allowed in with her camera to spy on the Zoroastrian rituals (*eye roll*) but after that, it was more about her recovering health and how she was getting on as she became more acclimated to the culture. And I do get culture shock and compensating with humor, which is what I think the author was doing here. It just comes across badly now because the humor doesn't age well (and looking at the Goodreads reviews, it seems to have offended a number of Indian people, too). The last quarter of the book or so talks about 9/11 and her fear for her husband as he did his reporting in Afghanistan and Pakistan, and a horrific moment in which she thought he'd been captured and killed. It's an odd tonal shift, especially when she tries to end on an almost spiritual note after making light of religions and treating them like they're funny party hats she saw in a shop window for most of the book. It made me miss the poorly-aged humor.

I'm rereading this book as part of this project where I revisit books I liked and disliked when I was younger. Some of my past status updates for this book were actually preserved, however, and it appears that I did not enjoy this book when I read it. I vaguely remember giving it a two. I'm giving it a three now because at times it could be funny and the writing could be very vivid and sensory, but I would probably not recommend this book to anyone who wasn't (still) a fan of Maarten Troost.