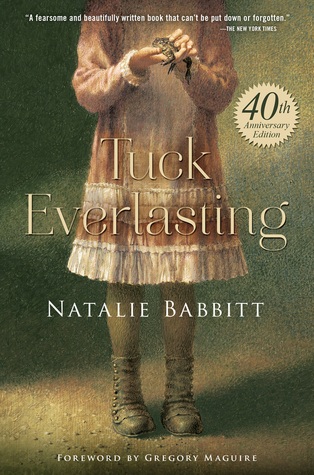 I'm doing a project where I reread some of the books I liked when I was younger and seeing what I want to keep and what is better reconciled to memory. TUCK EVERLASTING is one of the few books where I actually saw the movie first, which actually set me up for disappointment because the movie was well-casted and really well done, and they upped the age of Winnie, making the movie more like TWILIGHT with the whole "how long have you been seventeen?" thing. In this book, Winnie is ten and Jesse is seventeen-going-on-eighty, which definitely makes the book way more yuck.

The movie is more of a straightforward romance but for obvious reasons, the book is not. Instead it's sort of a precocious coming-of-age tale and a philosophical musing on the ephemeral nature of life. If you could live forever, would you? How would you account for the draining of the world's resources? How should people be chosen for eternal life? It asks some tough but interesting questions and it's probably no surprise to you that the villain of the tale is a man who is hell-bent on living forever, no matter who he has to hurt.

I thought the story was okay. It's really short and clearly intended for a much younger audience than the movie. The first time I read this book, I remember liking it a lot, but this time around I found myself rolling my eyes and thinking about the movie instead. It kind of has a sad ending but it ends up being kind of bittersweet too, and I liked how the author alluded to certain things. In my first reading, I think I gave it five stars, but this time around, I'm feeling a three. It was decent but I don't think I'd reread.