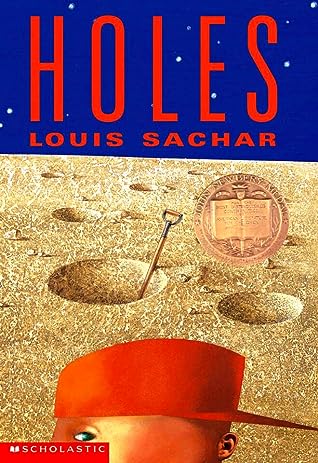 I'm doing this project where I reread books I enjoyed when I was younger. I've read and reread HOLES several times over the course of my life and every time I enjoyed it in a different way. It's such a compelling story and I think one of the best things about it is how everything ties into everything else and it all comes full circle.

Stanley Yelnats, whose first name is his last name backwards, is sent to "Camp Green Lake" when he has the misfortune of being in the wrong place at the wrong time and is accused of theft. The camp isn't actually a camp, but one of those punishment retreats that disciplines kids with back-breaking physical labor. In this case, the boys dig holes in the desert under the hot sun, 5ft wide, 5ft deep. The logic being that if you take a bad boy and make him dig holes all day, it turns him into a good boy. Seems like Republican logic to me.

Stanley meets the other campers, who are pretty ethnically diverse, but the one he ends up closest to is a young Black man named "Zero." Everyone treats Zero like he's stupid because he's quiet and functionally illiterate, but there is actually a lot more to him going on to anyone who actually takes the time to get to know him, as Stanley finds out.

There's a ton of other stuff, too. You get to learn about the history of Green Lake and how it was once a prosperous Western settlement with an actual lake. You get to learn the tragic history of Stanley's no-good-dirty-rotten-pig-stealing-great-great-grandfather. And you even get to learn about the mysterious Warden of the camp and why hole-digging ended up being the de facto punishment for the boys. By the end of the book, everything comes full circle in an incredibly satisfying way.

I enjoyed this book just as much as I did the first time I read it, and finished it in a single sitting. The language is not particularly complex but it paints an interesting picture of morality and justice and I liked that no one in the story was really pure good or pure evil (well-- with some exceptions). It ends up being a critique of the justice system and an interesting cautionary tale of how small actions can have large-scale effects. Definitely a must-read for all ages.