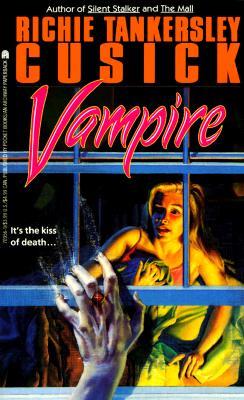 It's a truth universally acknowledged that if a book exists and it's about vampires, then I want to read it. VAMPIRE came out in 1991 in case you couldn't tell from that gloriously cheesy Day-Glo cover. In it, a girl named Darcy comes to live at her attractive young uncle Jake's for the summer. Jake lives above a horror-themed funhouse called the Dungeon of Horrors, and a whole bunch of attractive young people work in there. It's like Dawson's Creek... for goths!

But unfortunately all is not well and good. There's a serial killer running about who thinks he's a vampire. He slits the throats of young women and leaves red marks that look like bites. It's got everyone creeped out, including Darcy... especially when it looks like the vampire might have his eye on her as his newest victim.

VAMPIRE was a fun book. Some of these older YA horror novels are really cheesy and have terrible writing, but this one is pretty well-written. The teenagers act like teenagers and there's a lot of drama and red herrings to keep it from being too predictable. I was totally wrong in guessing who the "vampire" was. So that was cool.

I'll definitely be checking out more of Ms. Cusick's work.