The Fire by Caroline B. Cooney 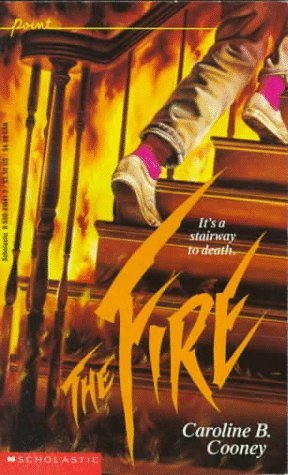 This is the final book in the Losing Christina trilogy. The first book is THE FOG, the second book is THE SNOW, and the third book is THE FIRE. I read all of these in middle school; my school library had a little wooden bookshelf in the corner filled with Point Horror novels and other YA pulp, and I can't tell you how many times I went over to that corner and availed myself of the latest trash.

I still remember the first time I read THE FIRE. It was nearing summer and hot. I was a shy thirteen-year-old, about to start my first year of high school. I really admired Christina's bravery and how she stood up against all the bullies who were gaslighting her and trying to bring her down. She was such a romantic figure, and in between first loves and her coming-of-age, she had to fight against the sadistic and evil Shevvingtons: adults who got pleasure out of emotionally abusing children to the point that they "broke."

THE FIRE is probably the weakest book in the trilogy. Having read them all back to back, I would say that THE FOG is the strongest. The writing is lyrical and gorgeous and it features some truly unique metaphors and symbolism. THE SNOW is also quite good-- but THE FIRE falls back on the symbolism of previous books, to the point where it begins to feel a little repetitive. The advantage to this is that you can go right into THE FIRE, as I did as a kid, without reading the previous books.

In THE FIRE, the Shevvingtons have turned their focus on Christina. She was always their victim, but in THE FOG and THE SNOW, they had their eye on other girls. Now they're planning on leaving, and starting their evil anew in another city, but before they go, they want Christina to suffer as she never has before. The stakes have never been higher, and as Christina finds herself in rooms splashed with gasoline and carrying purses filled with matchbooks, she begins to realize that her end is not going to be one of ice, but one of fire.

I honestly really enjoyed rereading this trilogy. I'm revisiting a lot of my old favorites and some of them definitely don't hold up (*stares at R.L. Stine*). Cooney's work does, though, and I think these books in particular would make an excellent mini-series like Flowers in the Attic. They also seriously need to be rereleased with new and pretty covers, because I think she's a heroine to rival Katniss Everdeen in terms of sheer number of shit that gets thrown at her over the course of these books. In THE FIRE, she's broken down and getting tired, but I never stopped rooting for her. Not once.

I'm going to start Cooney's Vampire trilogy next and after being pleasantly delighted by the Christina trilogy, my hopes are very high regarding the rest of her work!