The Magical Language of Others by E.J. Koh 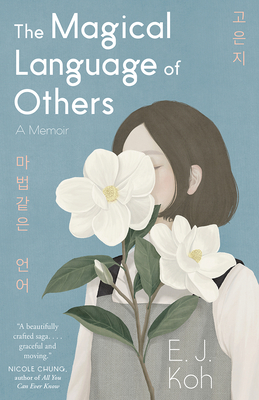 THE MAGICAL LANGUAGE OF OTHERS is a very short book that packs a punch. In it, E.J. Koh describes her parents taking a fantastic job opportunity in Korea that meant her and her brother (both teenagers) living alone in Davis, CA for three years. She also writes about her grandmother's life, and how she flouted the conventions of her time while also being oppressed by them. In addition, Koh writes about her own coming of age as an adult, and how that was influenced by her identity, language, and culture.

TMLoO is very beautifully written. I liked the scans of the original letters her mother wrote to her while she was away in Korea. I also loved the parts about language, and how Koh talked about some of the things that are different in Japanese (which she learned as an adult), and how so much of meaning is impossible to translate because of symbolism or the physical gestures used to give them meaning. Language is such a fascinating construct, which is why there are entire subdivisions of psychology and humanities devoted to studying how it works and develops.

My only criticism with this work is that it didn't really flow as smoothly as I wished it would. Some parts were fascinating and others dragged. Even though this book is just over 200 pages, it took me longer to read it than I thought it would. Some parts were difficult to get through because they just weren't as interesting as other portions, which I think is hard in a memoir. It's difficult to pick and choose which portions of your life to share with an audience and guess what they will find interesting. Mostly, I do feel like the author succeeded though. I thought she was very interesting.

I'm honestly surprised that this memoir isn't more popular than it is. I think it's very topical, as it talks a lot about dual identity, bilingualism, and the way culture influences the way we define ourselves.