The Snow by Caroline B. Cooney 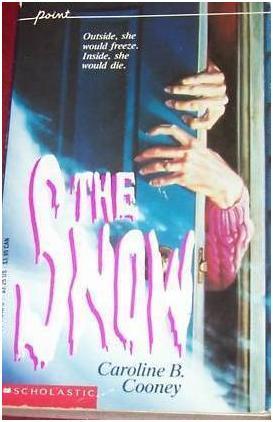 Growing up, the Losing Christina series were probably among my favorite installments of the Point Horror series from Scholastic. I'm so old that when I read them, they hadn't yet been rebranded into Losing Christina, just as the vampire trilogy hadn't yet been renamed Vampire's Promise. I loved Christina-- she was a strong, dreamy, romantic heroine who grew up on an island and had to rise up against the terrifying adults who psychologically tortured young girls like her, getting rich, sadistic pleasure from breaking them until they either died... or went insane.

The premise of these books is incredibly dark and even rereading them as an adult gives me chills. They were even more terrifying as a child, because I couldn't understand why none of the other adults or children would listen to Christina about what was going on. As an adult, I do understand-- it's hard to believe that people are capable of doing terrible things; especially if you might have helped to facilitate those terrible things by supporting and even relating to the people who did them. It's easier to brand the truth as a falsehood when cognitive dissonance challenges your worldview.

Poor Christina finds this out the hard way in THE FOG, when the Shevvingtons make it their business to destroy the beautiful but fragile seventeen-year-old Anya. In THE SNOW, the Shevvingtons turn their attention to the needy and immature Dolly, Christina's best friend from the island. Dolly loves the Shevvingtons and thinks they are wonderful. No matter what Christina tells her, she won't hear anything bad about them. Even when they put her in unsafe positions or make her feel bad about herself, she truly believes that they mean well for her because they are adults.

I've joked in other reviews that this should be called the Gaslighting Christina series because it truly is a series that builds on how the people around you can bully, lie, and manipulate you into thinking that you're the one in the wrong when you're not. As evil as the Shevvingtons are, it's far more terrifying how the other adults in the story listen to them, and how successfully they've groomed the children in the school to carry out their work and act as their minions.

Part of the reason I loved this series so much is because I was bullied when I was Christina's age, and I found it really inspiring to see a girl rise above all that hate and toxicity like granite, even when she felt like she was about to lose all hope. Christina is such a strong heroine, and her flaming personality is a bright candle in all this Gothic gloom. These books seriously need to be rebranded with better covers because they hold up so well. I'd love to see them made into a mini-series the way FLOWERS IN THE ATTIC was. It's such a good, terrifying story and the writing is so lyrical and chilling.

I would honestly recommend this trilogy to anyone. If you have Kindle Unlimited, you can read it for free!