Sealand: The True Story of the World’s Most Stubborn Micronation and Its Eccentric Royal Family by Dylan Taylor-Lehman 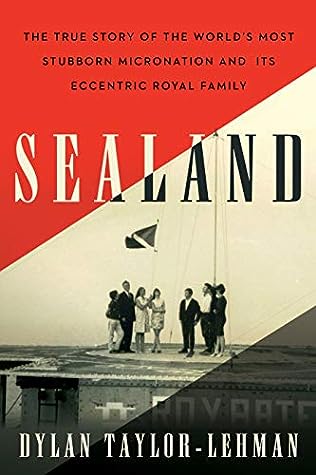 This is a book about the British guy who decided to claim a disused offshore military fort and turn it into a country. Sealand is a micronation that sounds a little bit like a joke, and is probably the basis for that Family Guy episode, Petoria, when Peter Griffin discovers that, due to a zoning technicality, his house's plot of land isn't even technically part of the United States. According to this rule cited in the book, abandoned islands and structures can be claimed if they weren't declared sovereign.

Sealand is considered by some to be the "world's smallest country," although it isn't really recognized as a country by most. You can buy royal titles in packages on their website, which I find hilarious. It's a nation that doesn't really seem to take themselves or anyone else seriously, and feels like a concept dreamed up by a socialist hipster.

SEALAND the book is a biography of the founder, Roy Bates, who does seem a bit like a proto-hipster. As we find out in the book, founding your own country isn't easy and when you force larger, more powerful nations to take you seriously, trouble abounds. I found that cat and mouse element of the book most interesting, as more established countries tried to figure out how to deal with Sealand and it's royals without embarrassing themselves. I'm not sure they succeeded.

I found this book to be pretty dry. I might not have finished it were it not for the author's tongue in cheek style, which ended up proving to be the book's saving grace. I've found this to be an issue with a lot of nonfiction-- authors get so caught up in the fruits of their research that they forget to be an entertaining book and end up reading more like a textbook. As with all books, in nonfiction you need to "murder your darlings" and cut anything that bogs the book down and makes it too long. This could have been a much shorter book, in my opinion, without losing any value.