Most Likely by Sarah Watson 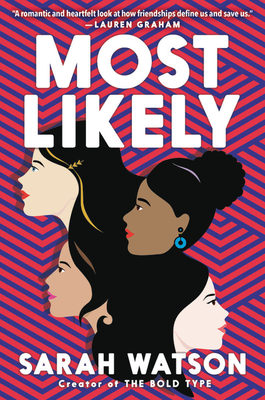 This was an okay book. I hate reviewing okay books because I don't have a lot of feelings about them one way or the other, and often end up doing some skimming, even though they aren't bad. They're just... okay. And a little born.

MOST LIKELY has a great premise. You see a girl, all grown up and successful as a woman, and then the rest of the book is about her senior year of high school and the changes that put her on the inspiring path she's on and the relationships that paved her life.

It's kind of like a feminist version of THE SISTERHOOD OF THE TRAVELING PANTS. Ava, CJ, Jordan, and Martha all met when they were young in a park over the summer and stayed friends well into their senior year of high school. Now exploring relationships and college options, as well as other major life changes, they're all in a highly transitional phase that will change their friendships and, indeed, their whole lives.

All the girls were pretty bland imo. Even though all their stories were well-crafted and they had REAL ISSUES! their voices felt pretty interchangeable. Maybe it would have helped if they were written in first person instead of third person.

Also, how sad is it that the author envisions a female president in the future but still plays it up that the heroine had to take her husband's name for people to vote for her? That's kind of depressing.

I liked the ending, though. :)