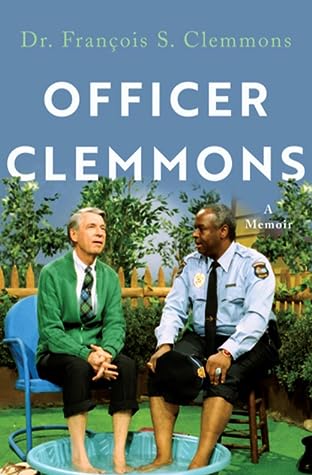 I grew up with Mr. Rogers' neighborhood and really loved the show. It always felt much more intimate than other children's programs because of the way Mr. Rogers would talk to the camera (and therefore, the child watching on the other side), and how he would go on field trips to places in that overlap between the world of the child and the adult. One episode that stuck with me all these years later was about a trip to see how and where crayons are made. Officer Clemmons was a recurring character on the show who I think I only vaguely remember, as he retired in 1993, and I probably would have only seen him on reruns of older episodes.

Despite the title, the focus of OFFICER CLEMMONS is not primarily about his role on the TV show, which doesn't really come into effect until the latter half of the book. This is François S. Clemmons's story about how he grew to love musical performing, what it was like to grow up in the times directly following post-segregation and have family members who remembered the times of slavery, and also about what it was like to be gay in a time where that wasn't widely accepted. Clemmons actually married to hide his sexuality while meeting with men on the side, and even though he felt guilt about using his wife that way, it was the only way that he could be free to be who he was.

I liked this memoir. I feel like it was brutally honest and touched upon a lot of really tough subjects in a matter-of-fact way. It was really interesting to see this complex history behind the character of a beloved kids' television show and really edifying to see how the adults we know and loved as children can have a secret life that they are never allowed to reveal. My favorite portion of the book was definitely about his role on the television program and all his treasured memories about Mr. Rogers. It's cool to know that he was every bit as kind and compassionate in real life as he was on the television, and his unequivocal support for Clemmons, including defending him to a racist orchestra, was truly incredible. We need more people like that, who use their clout to speak out against injustice.

OFFICER CLEMMONS is a good book, and I do recommend it-- especially if you are old enough to remember him on the original episodes. It's a great memoir about a career in retrospect, while also talking about matters of sexuality and race. I won't be surprised to see this topping a lot of "best memoirs of summer" lists when it comes out in May.