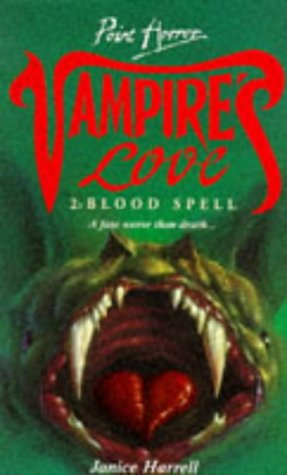 I enjoyed the first book, BLOOD CURSE, in this series enough that I wanted to check out the sequel. The best way of describing these books is kind of like a gender-reversed Vampire Diaries. James, the dumb, perfect human boy, has attracted the attentions of a vampiress named Rina. The only problem is, he has a human girlfriend named Chelsea. Rina pays James visits in the night for sexy neck biting sessions, but he still stays loyal to Chelsea despite his growing attraction to Rina. But how does she fix that? By killing her!

...Except, oops! She accidentally made Chelsea into a vampire instead. And while Chelsea was ambitious as a human, she's positively evil as a vampire. She's decided that Rina must die and James will be hers-- as a vampire-- and enlists the help of the very vampire who turned Rina, a man named Vlad, for assistance.

This book... was frustrating. First, James is such a dope. I didn't buy him as a love interest and couldn't understand why two human women would waste their time over this dope. People talk about Bella Swan being a dopette, but at least she was smart and passionate. James has all the passion of a slice of whole grain bread and he's not very smart. Why would two vampire women waste their time on this twit? You have all of eternity... come on!

Also, this book jumps the shark about fifty times. I'm not exactly expecting realism in my vampire novels but it really felt like Harrell had no idea what to do with this one and just crammed as much as she could to pad this out to novella length so she could publish it. It showed. I was incredibly bored.