The Dead Rule the Night by Heather Crews 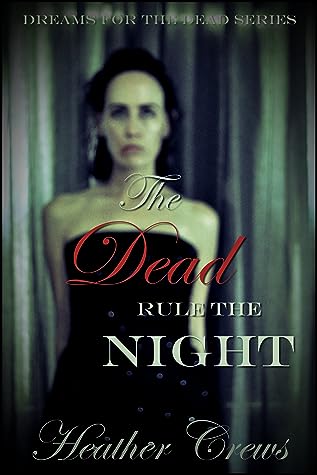 The first book in this series, DREAMS FOR THE DEAD, was originally supposed to be a standalone. But then I entered Heather's life and nobody can nag like I can. I'm like the inspirational coach/cheerleader from your nightmares. Now there are THREE books in this amazing series, with more to come. Mandatory disclosure: I am friends with Heather and I did the beta-reading for this book, but I bought a final copy like everyone else and I'm such a jerk, you know I'd totally rate my friend's book a one star if I hated it. I've done it before...

Luckily, with this one, I didn't have to... because I liked it!

Anyway, THE DEAD RULE THE NIGHT is the third book in this series. Our heroine, Dawn, has been turned into a vampire but is reluctant about giving in to the darkness. She doesn't like taking blood and balks at the thought of killing humans, let alone the numerous other depravities that vampires like to indulge in. (Branek, from DEAD HEART, could tell you all about that...) Dawn's vampire boyfriend, Tristan, is all too happy to assist. And with his help, Dawn finds out that the dark side really is so much better. Especially with a hot, moody and broody ex-Goth to help you discover it.

But of course-- this is not just a romance. In this book, there's more focus placed on Tristan's siblings, Jared, Augusta, and Branek. At the end of the first book, their house burned down, and some of the siblings appeared to have been mortally wounded. But what really happened to them? Gus, their sister, is the key. She's like a poisoned pixie stick, hiding all her broodiness under caustic sugar, and is definitely jealous that her brother got the happy ending that she always craved. While looking for her own, she encounters a sinister vampire duo who have an unhealthy interest in her family...

I really can't tell you how much I loved this series. At first I waffled between four and five stars but anything that keeps me reading until 3AM has to be five-star worthy. These are vampires at their darkest, and they're like The Lost Boys meets the Manson family, if everyone was in a Goth cult. I know vampires aren't real (I wish, though), but if they were, I 100% believe that this is exactly how they'd think, act, and behave. The only other vampire authors whose books resonated with me like this one were Trisha Baker and Susan Squires. I like my vampires dark, thanks!

Also, Gus and Dawn are both such strong heroines. They don't always behave in conventional ways, but that's kind of their appeal. Dawn really becomes so much stronger over the course of this book, instead of weaker, and even though her boyfriend refuses to change for her... he totally does. And Gus totally owns her sexuality and makes no apologies for being the way she is, and I loved her for that, too. I think the next book coming out is going to be a "prequel" about Jared and Leila, but after that, I think we get Gus's story, and I'm really, really looking forward to learning more about her.