The Vampire's Promise by Caroline B. Cooney 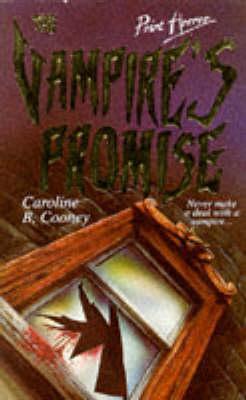 THE VAMPIRE'S PROMISE is the third book in the vampire series, renamed Fatal Bargain when the series was rebranded. Here, our unnamed villain returns to torment a group of six teenagers who decided to have a party in the haunted mansion that's slated to be demolished. With his home being torn down, the vampire really has nothing left to lose, and he's so hungry... Being one to toy with his prey, he tells the teens that he'll be happy to let them go, provided that they vote someone to be his eternal victim instead.

I owned this book when I was a kid, so I've read and reread this one multiple times. I remember thinking it was ingenious when I was fifteen, but as a thirty-something, I'm slightly more skeptical. This book is better than the second but not as good as the first, and part of what bogs it down is a litany of unnecessary POV swaps-- we're not just treated to each of the six kids, but also one of the younger siblings, one of the older siblings, a carjacker, and a policewoman.

Regarding the actual teens themselves, I thought they were all pretty well done. Lacey was my favorite as a kid and I still liked her the best now, but all of the others are extremely unlikable. Watching them argue about who gets to die is amusing but kind of sad (in fact, Roxanne, one of the bitchy teens, has this hilarious line about how selfish she is that stuck with me for all these years and made me laugh anew last night).

This was a fun series to revisit but it really doesn't hold up as well as some of CBC's other books, like the Losing Christina trilogy, or the excellent Twilight-esque romance, THE STRANGER.