Freeze Tag by Caroline B. Cooney 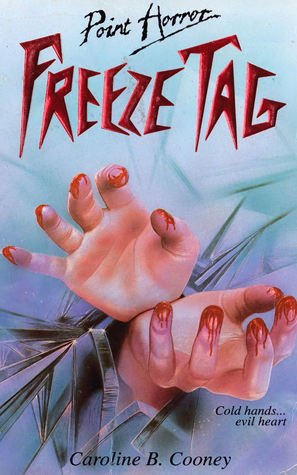 FREEZE TAG is a "new to me" Point Horror novel that was first published in 1992. Meghan has been best friends with the Trevor family her whole life. She's the literal girl next door, in awe of their warmth and close-knit family bonds. Lannie is the interloper, the creepy girl that no one likes. But Lannie has a special power: she likes to play "freeze tag": only... when she freezes you in the game, you freeze for real.

Meghan and West are now going out, but Lannie doesn't like this. Because Meghan was frozen by Lannie when they were children, and she only unfroze her if West would "like her best." So Lannie breaks up the school's golden couple by threatening Meghan with another freeze, as well as West's younger sister, Tuesday, and anyone else who gets in the way of her and what she wants.

This is the darkest story I've read by Caroline B. Cooney. Darker even than Losing Christina, which is an entire trilogy devoted to the psychological torture of children by adults. There's just something so sickening about Lannie's extreme sociopathy and what she is doing to West. It's basically sexual assault-- he's a victim, blackmailed into being her boyfriend and all that entails. Parts of this book made me so uncomfortable; she's so fucking evil.

On the other hand, that darkness is part of the reason this book holds up. Cooney takes a silly premise that R.L. Stine might come up with for one of his Goosebumps books, but she makes it genuinely terrifying and believable. I'm also in love with her poetic descriptions and her ability to set a scene. The winters in this book juxtaposed against the summers, and all of the sights, scents, and sensations are all so well done. In some of her books it can feel a little dialed in but not in this one! Not at all!

The ending was a bit dissatisfying but also really interesting. I kind of wish there was an epilogue, but on the other hand, it's fun to imagine what might have gone from there, too.